With this title and the fascinating characters introduced, you should not pass this book by.

When we first heard about a comic called CURB STOMP coming out, I immediately cringed a little inside. The idea of a curb stomp is incredibly brutal. When the news accompanied by a list of female gang members as the lead characters, I was both intrigued and a little confused. I did wonder if the book would be for me. Thankfully I read it and discovered it will have an appeal for many.

The easiest and quickest way to sum it up is the movie The Warriors with a gang of five women. In the borough of Old Beach, outside a big metropolitan city, we find there is a gang of five women called The Fever. It's an area the police tend to avoid so it's up to the ladies to protect their home. There are other gangs in neighboring boroughs but there is an agreement for everyone to keep to their own turf. Obviously things will take a turn for the worse. A scheme is hatched and we soon find a gang war about to erupt.

Throughout the story, Ryan Ferrier does develop the characters as we come across them (you can find out more about the ladies HERE). Despite the title, this isn't a book that hinges on violence to carry it along. We see the ladies as real characters that are simply doing what they need to to get by and protect their own.

There is a nice mix to the characters and they each have their own feel and personality. This is further shown with the art by Devaki Neogi. While there is an actual curb stomping that takes place, it's not done in a gratuitous way. Yes, we'll have some violence here but it's not extreme or over the top.

While I did enjoy the art and look for each character, there were a few moments it didn't quite feel right. At times, some of the panels felt a little over-saturated with reds and oranges. Some of the characters came across as a little stiff too.

CURB STOMP was a delightful surprise. That doesn't quite sound right considering how savage the act is. Ryan Ferrier has introduced us to an interesting little corner of the world where gang violence and turf wars are a way of life. There's obviously an intriguing angle with a gang consisting of five ass-kicking women. Each has their own look, feel, and really cool name. The art does go along with establish the mood and vibe of the book. There were some moments the art and color felt off a little but not enough to fully distract you from enjoying the issue. CURB STOMP has me hooked. I found myself cringing at times and on the edge of my seat and the events escalated towards the end. There aren't really many books like CURB STOMP on the shelves and I'd recommend you check it out. 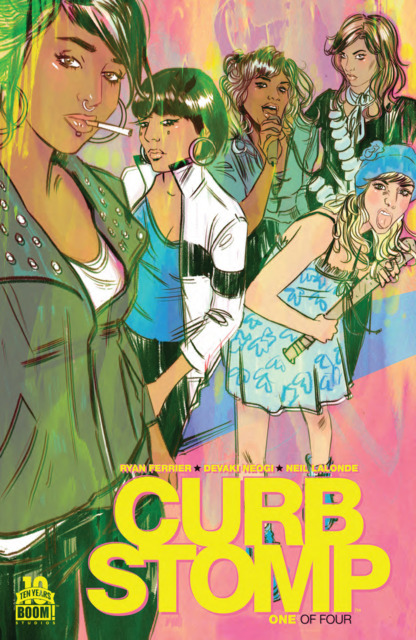