Renee Montoya returns as The Question

First and foremost, it is great to see Greg Rucka writing Renee Montoya again. It's a breath of fresh air since Montoya hasn't been seen in the New 52, aside from her picture on a wall in BATWOMAN, which led many fans to assume she's dead.

This is only a two-issue story but Rucka does a phenomenal job setting everything up quickly without it all feeling rushed. We're introduced to Renee Montoya and Two-Face and the world this takes in, within the first few opening pages and as excited as many will be to see Montoya back in action, this version of Two-Face is pretty fantastic. He leans a bit more towards the Harvey Dent side of his being and there's a lot of humanity in him. He's working for the greater good and doing so with Renee by his side. Plus, he kicks a bunch of butt with two lead pipes.

This book has a really great line-up of some of the over-looked characters Gotham has to offer. On top of Montoya and The Question, Huntress enters the mix as well as Batwoman. The last one is blacked out because said character is a big reveal. This is a cool line-up featuring characters we haven't seen together in quite some time.

Many people may question how this all ties into Convergence. Halfway through the issue, Brainiac makes an appearance and you get your answer then. The whole Convergence aspect in this issue doesn't really matter much though. If this were a monthly book, I'd be on board, so a part of me just doesn't care how it ties in because the creative team and the characters here come together for a pretty cool issue.

It's great to see Cully Hamner and Dave McCaig working together again, both of them did some phenomenal work together on THE SHADE. These two compliment each other exceptionally well. One thing that really stands out is the emotion he puts into The Question, who has no face. He uses Montoya's body language to get the tone of her voice out with each scene. McCaig does some really nice work with the color choices on Question's face with Hamner's outlining the the areas where her nose and eyes would be, rather than going with a flat surface, which we've seen in the New 52 version of the character.

This really feels like a love letter to the Pre-52 along with elements of No Man's Land, which is great for fans but not so great for people have never read either of those. Rucka does do a fine job at cramming in as much of these characters as he can into this single issue and catching up readers, but if you're not a Renee Montoya fan, this book may not appeal to you.

This is really a book for fans of Renee Montoya as The Question. It's essentially fan-service that's done incredibly well. The Convergence aspect of this book isn't important. What is important is seeing Greg Rucka, Cully Hamner, and Dave McCaig deliver readers some awesome characters and fun story. These next couple of months may be pretty rough with all these Convergence books, and even if you're not a Question fan, I'd put this book towards the top of your Convergence reading pile. 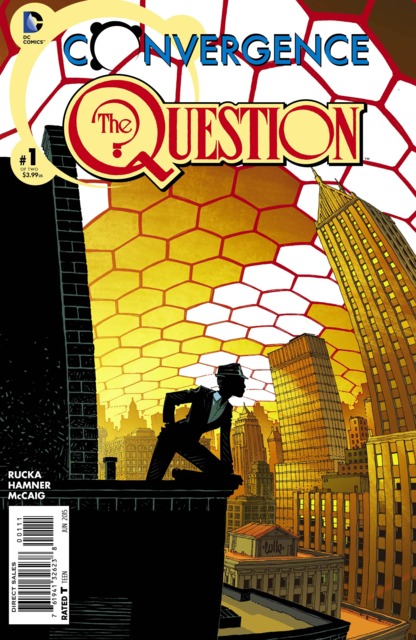