What's Superman been up to after a year under the dome with no superpowers?

This issue made me realize how much I missed the pre-New 52 version of Superman. Don't get me wrong, we've had some really good Superman stories in the New 52 but, at least for me, there's something reassuring about seeing this version, even if he was de-powered. It might be a big old dose of nostalgia but it was enough to grab my interest.

The set up is different cities from different universes have been taken. The citizens have been living under a dome for a year. Those with superpowers have been living without them. Thankfully for Superman, he had Lois Lane by his side. You can imagine the two wouldn't simply sit around and do nothing, especially when stuck in Gotham City. It's just another reminder of who these characters are. Of course all this makes sense since it's Dan Jurgens writing the familiar version.

Things soon start moving towards the main set up, seen in CONVERGENCE #1. As with the other Convergence titles, Superman will find himself up against other versions of his friends and enemies. With the Flashpoint versions showing up, things are going to get a little messy.

Lee Weeks' art captures this era of Superman's history. Brad Anderson's colors also adds to the dark feeling of being trapped and helps kick the action into high gear once the fighting begins. I actually found myself going back and just looking at all the panels again after reading the issue.

The premise of a certain version of the characters fighting another version feels like it could get old really quickly, especially with so many separate Convergence titles doing the same thing. Maybe it's just me, but I would have preferred to see more of a focus on a single version or set of characters rather than just see a bunch of different comics focusing on fights. This is just the nature of all the different series. Thankfully Jurgens does add some heart to the relationship between Clark and Lois.

I didn't realize how much I missed this version of Superman until Dan Jurgens brought him back. Covergence is underway and we're seeing familiar versions of our favorite characters. Jurgens and Lee Weeks do a fantastic job in bringing back the nostalgia despite the setting and situation the story calls for. It's hard to say how much of version A fighting version B we can handle over these next two months but this issue shows that we can have some fun while seeing the action unfold. 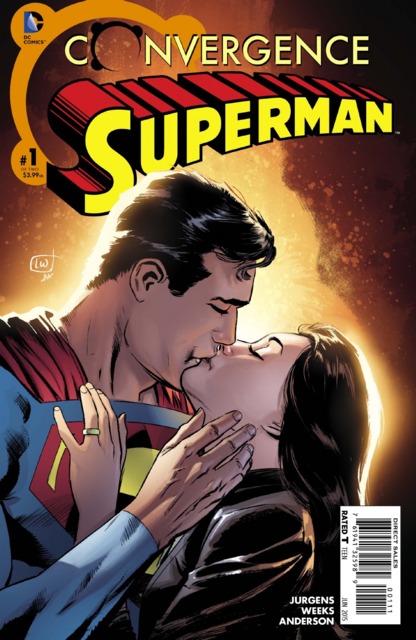