Convergence Shazam #1 - Return of the Thunder

Have a taste for Shazam and the Marvel family? You won't want to miss this issue.

The Convergence books so far have been interesting. We've been able to see past versions of our favorite characters written and drawn by a variety of creators. The main problem many have is the formulaic presentation most have had--we're introduced to the characters, the dome falls, featured characters are forced to fight other versions of heroes. What some of have really wanted was the chance to actually see and visit the worlds featuring these other versions of the characters. That's exactly what Jeff Parker, Doc Shaner, and Jordie Bellaire manage to do.

Parker comes up with a simple but brilliant loop hole that allows us to see Billy Batson and friends for pretty much the entire issue. It's like a dream come true for fans of the characters. There may be some limitations due to Billy, Mary, and Freddie being powerless because of the dome but it's a great way to spend some time in their gone, but not forgotten, world.

Shaner's art and Bellaire's colors will dazzle you as each page oozes with nostalgia as well as suspense and intrigue. There are plenty of familiar faces that will make you want to read the issue as slowly as possible so you can savor it all before reaching the end.

You know what has to come eventually. Getting this nice taste of the characters and what their essence is supposed to be allows us to look forward to the next issue, even if it has to follow the Convergence-fighting formula.

If you have any sort of fondness for Shazam (Captain Marvel), Mary Marvel, and Captain Marvel Jr., you won't want to miss this book. The Convergence titles have been forced to follow a certain formula but Jeff Parker finds a way to slightly work around that and deliver a fantastic story, true to who the characters are. Doc Shaner's art and Jordie Bellaire's colors will make you wish we could spend an even longer period of time here. If you think you've seen all the Convergence titles have to offer, you haven't seen this issue. Just a warning, you might find yourself unable to resist cheering out load for the heroes. 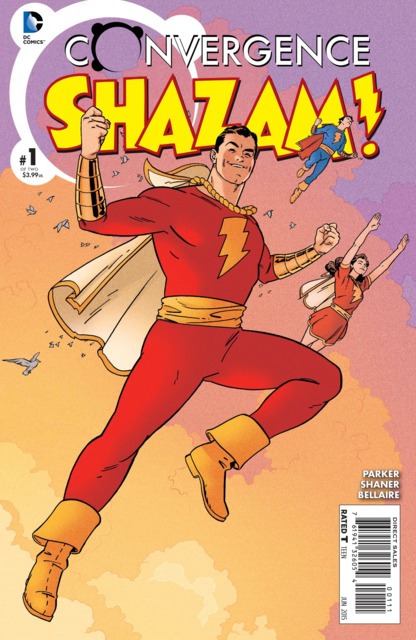