Convergence Batman: Shadow of the Bat #2 - Home Is the Sailor

The two Batmen collide with the vicious, ruthless Wetworks in the hold of an aircraft carrier.

What an amazing concept this is for an action-focused issue! Batman and Azrael confront the crack mercenaries of Wetworks in the hold of the aircraft carrier that has been transformed into a safe haven in the wake of the dome lowering. Wetworks, of course, aren’t afraid to take things to an ultra-violent, 1990s XTREEEEEEEEEEEEEME, a line that neither Batman will cross, making the battle even more of a hunter/hunted situation. Though Bats and Azrael are outnumbered and outgunned, they have far, far more wits and resourcefulness to fall back on that the super-powered soldiers aren’t used to accounting for, and the battle we get is one of sticking, moving and constantly being on their toes. Larry Hama’s right in his wheelhouse, writing the characters as exaggerated and bombastic while keeping the pace of the overall issue appropriately intense and speedy, taking the reader along for the ride and giving a great sense of place.

Rick Leonardi’s art is a mixed bag, but when it’s on, it’s good. It’s good at making the characters of Wetworks, who have a bad habit of blending together, actually look distinct and giving them even subtly different cues and ticks while the action looks fluid and is easy to follow. Dan Green’s inks lend a lot of impact and weight to the fights and make the characters seem really, truly heavy and hulking where needed and lithe and agile where not while Elmer Santos’ colors fill the panels with an actual sense of brightness that usually works to lend things a “big action” feel.

The characters in this issue might be distinct, but they also feel like they’re following a script. Yes, Wetworks aren’t necessarily good people, but when they go out of their way to attack a woman and her child, with the intention of killing them and though they claim they’re going to kill them to stop their city from being destroyed, something they also said earlier when the kid’s in the crossfire, it makes no sense the second time. There are also times when characters act on information they have no way of knowing and the plot skips ahead from the end of last issue, giving us a glimpse of what’s already happened and what sounds like it would’ve been worth seeing.

When the visuals are on, they work well, but without Philip Tan to bring his trademark edgy, razor-sharp linework, they just as often feel listless and muddy in a way that doesn’t contribute to the tone or story. The colors are a likewise mixed bag as it’s good to see some brightness of tone in what is ultimately a light issue, some darker, drabber stuff would have been more appropriate at times.

This isn’t a bad issue by any stretch, and it has a very, very strong concept at its core, and it’s such a strong concept that it actually winds up carrying a great deal of the title. The strength of the action also helps, but it can’t overcome an overall lackluster cast of characters nor the times where the visuals fail. It’s worth reading if there’s a pre-existing fandom for either of these groups, but the characters don’t come through enough to achieve greatness. 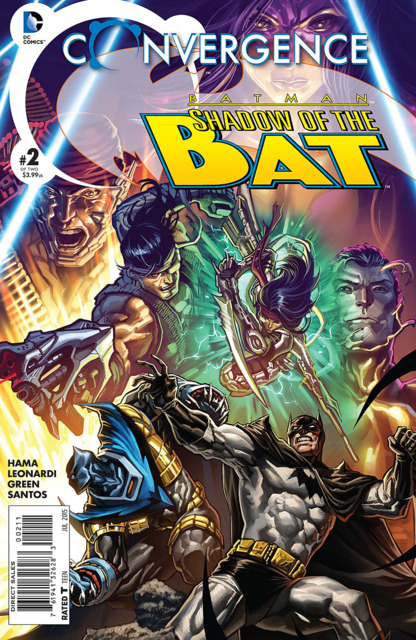