As the battles between worlds begins, what is going on with the Earth 2 survivors and Telos?

The Convergence books have been a mixed bag. It's been nice seeing some of the old familiar versions of characters but the repetitive story of version A having to fight version B is getting stretched a little. With this being the main book in the two-month event, there is a little more to the story going on. That's exactly what we would hope for.

Last issue we saw some anomalies to the "ultimate" version of Brainiac in his plan of capturing dying worlds and placing them in domes on a planet outside of space and time. Some survivors from Earth-2 arrived but without a world of their own to reside in. This prompted the planet to form a humanoid being calling itself Telos to take charge. Now it's up to the Earth-2 survivors to try to fight him/it while also figuring out what their next move is.

It seems likely that Jeff King is setting some things up for the EARTH-2: SOCIETY relaunch book for June with these characters. We also get some interesting interactions with the Earth-2 Batman and Dick Grayson.

Carlos Pagulayan and Jason Paz do a great job on the art and John Starr's color makes the characters pop off the page. We do see quite a few different characters and it's always nice to see some consistency.

I had some issues with the way the stories in EARTH 2 and EARTH 2: WORLD'S END went. Now this story feels like it's becoming a continuation of those books. That's great for fans of those series. Newer fans or readers that missed out and are looking to see what this event is about, will feel in the dark. For example, even though I was reading both series off and on, I don't know much about Earth 2 Dick Grayson. We still don't have answers to what happened to Brainiac and why exactly Telos dropped all the domes at this moment. And where did Telos go? We know he'll back but it felt as if he suddenly was removed.

Some of the interaction between the characters from different worlds was welcomed but everyone seemed very nonchalant about it.

There are some improvements over the last issue. With this just being the second issue, I can't help but wonder where exactly all this is going and what it's leading up to.

The main story of Convergence continues. Fans of the EARTH 2 characters will rejoice in the follow up with the survivors that found themselves facing Telos right before the domes were dropped. The good and the bad thing is it feels like this event is starting to have a bigger focus on those characters and the upcoming EARTH 2: SOCIETY series. There is some difficulty in figuring out exactly where this story is going but thankfully we are getting more of characters from one world forced to fight another world's heroes. This issue also has some nice art and colors that makes the story's flow move quicker. We might not be sure where things are going but our curiosity is still aroused. 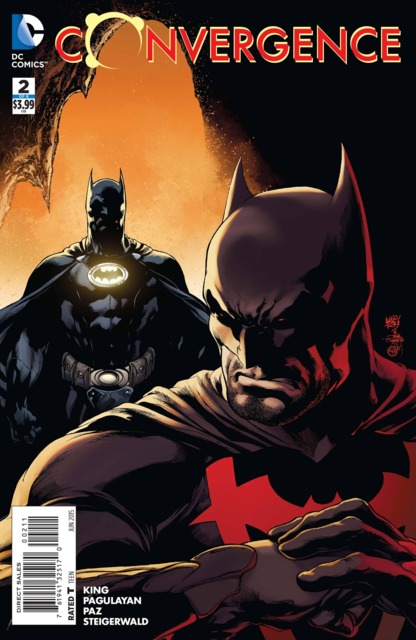