What's the deal with this story? Why will the different worlds fight each other? This is where it all begins.

The moment we've been waiting for is here. We've seen news of Convergence and even witnessed Superman discovering the huge number of bottled cities in the zero issue last week. This is going to be our chance to see past versions of our favorite characters. The issue strangely opens with a brief look at the INJUSTICE world but soon shifts to the survivors from EARTH 2: WORLD'S END. This gives readers of that series some immediate follow up to their fight against Darkseid.

Seeing the different versions of characters, even if they're just glimpses, you can't help but perk up a little. This is our chance to see certain versions of characters once again. The anticipation of them fighting others, while maybe not exactly how I would want to see them brought back and used, is intriguing.

Carlo Pagulayan and Jason Paz do a nice job on the art. John Starr's colors help give the different versions their own original feel. There's some interesting two-page layouts that moves the story across the book. It also allows for some more variation with the occasional bigger image popping out at you.

For DC's big event taking over the entire publishing schedule for two months, this issue starts things off in a peculiar fashion. The decision to include and spend the majority of the issue focusing on the EARTH 2 characters might not have been the best move. For those that haven't been keeping up with the weekly series or the endless destruction in the monthly series, they might not have a firm attachment to these characters.

When Telos was addressing everyone and using series or events titles to describe them for us (Infinite Crisis, Flashpoint, "Kingdoms that will never come..."), I couldn't help but cringe a little. It's good to let readers know that these worlds will be included but if sounded a little weird in the big speech.

The reason for the different worlds to fight each other felt a little lacking. It could move the story in interesting directions but also feels a little sudden. It was almost like, "Okay, everyone fight each other now!"

We may have had a zero issue last week but this is where Convergence really begins. If you're wondering what the story is about and why different versions of DC characters will be fighting each other for the next two months, this is where you find out why. There are some familiar faces as some EARTH 2 survivors take the spotlight against Telos, the being behind all of this. There might be too much of a focus on the EARTH 2 characters and the decision for everyone to fight each other might feel a little sudden. There is a sense of curiosity to see what transpires next. 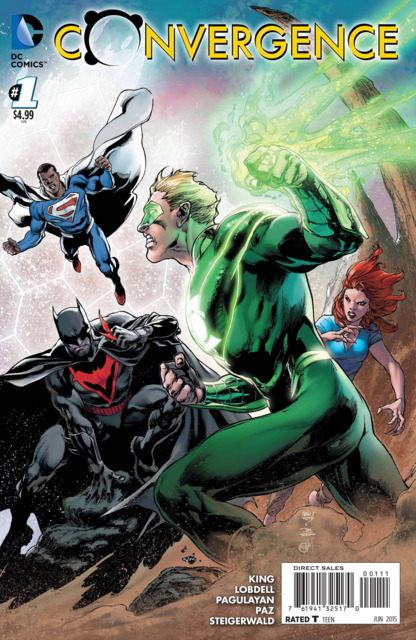