It all begins here. Superman gets pulled into the secrets of Convergence and Brainiac.

If you read Superman: Doomed, you might be wondering what happened at the end. Now we have an idea what that last page meant. Convergence kicks off with Superman, our current New 52 version of Superman, finding himself facing a Brainiac unlike anything he's ever seen. This is where things start to get a little freaky. It turns out this is a massive version of Brainiac outside time and space. We are treated to seeing the past different versions of Brainiac and how they are all part of him. He explains to Superman his importance as he shows him the different moments he's died in other worlds. When Brainiac's explanation over having different worlds and his plans to visit his world, Superman knows he has to do something about it. This puts him up against even more Brainiacs.

Dan Jurgens and Jeff Kings' weave an interesting tale. It's a good set up in driving home the point of what the Convergence issues will be about. You can't help but be intrigued. Seeing hints and glimpses at the past versions amps up some excitement you might not have even realized you had inside.

Ethan Van Sciver's art and Marcelo Maiolo's colors are like a loving smack in the face. Everything looks so crisp and detailed. You'll find yourself stopping and staring at each page. The scenes were we catch glimpses of other versions are like a magnet for your eyes. You can't help but really try to take a close look to take in all the details.

You have to keep in mind this is a zero issue. It's not a complete story and it's not supposed to be. It's meant to set up the overall idea and story. We have some great moments but some feel like just a way showcase our hunger for nostalgia. We had some really cool looking pages just to lead to the big set up and reveal on the final page.

This issue was 30-pages along with an eleven-page "Who's Who in CONVERGENCE?" but how will readers feel about an eight-part weekly series at $4.99 an issue?

CONVERGENCE has begun. Get ready to fasten your seat belts as Dan Jurgens, Jeff King, and Ethan Van Sciver prepare to take us (and Superman) on a crazy journey, unlocking the secrets behind Convergence while setting up the direction of the event. The idea becomes more and more interesting as you hear this ultimate version of Brainiac explain what's going on. Ethan Van Sciver's art and Marcelo Maiolo's colors crank up the excitement as we start to think about the possibilities this series could unleash. As a zero issue, it is a bit of a set up one but that's to be expected. Hopefully things will be cranked up even further in the following issues. If you're looking for a taste of what to expect in Convergence, this issue gives you one that will make you feel a little warm inside. 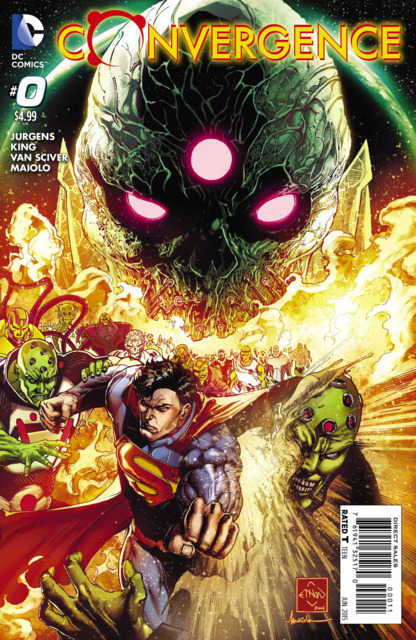