When the world's in danger, who else but a monkey with coding expertise can get the job done? Greg Pak and Takeshi Miyazawa bring life to Jonathan Coulton's music.

It's probably safe to say that most people like monkeys. They can be cute and when one is the lead in a story, it's easy to have sympathy for them. Code Monkey, or Charles, is a hard working monkey. Working in an office with a jerky boss, being under-appreciated and having a crush on a co-worker, you can understand where he's coming from. You won't even question the fact that we have a talking monkey in this situation. You'll just get pulled into the story and want to know what's coming next.

That's when the action kicks in. This is a fantastical world we're being introduced to. Even if you've never listened to the music from Jonathan Coulton that inspired the story, you'll be hooked. A mention of zombies and robots attacking the city? Sign me up for more of this series. You can easily see the potential of this world while we're just being introduced to it all.

Greg Pak's writing and dialogue takes the idea of a talking monkey that works in an office cubicle to a different level. The idea is almost a little too cutesy but he makes it work. You almost forget that we have an actual monkey in this situation aside from the fact he utters the occasional "ook" during his conversations.

Takeshi Miyazawa's art is perfect for the story. With Jessica Kholinne's colors, there's a strange mix of different genres along with a slightly realistic look (at times) that gives this comic a special feeling. It all looks great and you'll have fun while reading it all.

As the attacks happen, it's a little unclear what is exactly going on. We get some answers as the story progresses but you might not be sure who is the good or bad guys here.

The story almost moves too quickly. We're not sure how or why Charles can talk. It's apparent that people in this world aren't too surprised by this. Before we get a chance to fully know Charles or Matilde. And of course we can't have all the answers in the first issue but not knowing why there was a robot attack and kidnapping leaves you hanging.

Often you hear about comic book readers tired of the same formulaic stories and characters. CODE MONKEY SAVE WORLD is that "something different" worth trying. With Greg Pak writing the story and dialogue, you immediately get a feel for who our lead monkey is. You can understand what he's feeling and where he's coming from…even though he's a talking monkey! As the issue introduces us to the characters, you can see the potential for some great and wacky adventures in this world. The art and color by Takeshi Miyazawa and Jessica Kholinne are fantastic. This has everything needed to guarantee a fun four-issue miniseries. It's no wonder this project exploded on Kickstarter and was funded with ease.

Look for it through Monkeybrain Comics on comiXology for now. 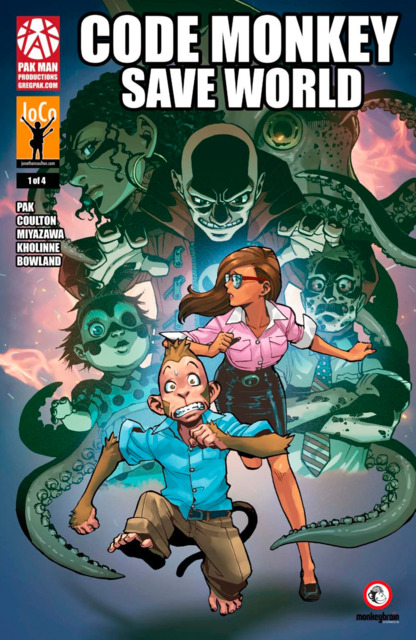