Luke is put to the test by Gamma and must kill the man and son who have been held captive.

Gamma and Kazumi decide Luke needs to kill the Coalition members that they've been holding captive at the cabin. Tattooed clone heads to the New Hope Fellowship church for a meeting with Reverend Wayne which leads to one crazy cliffhanger.

By far, the best part of the issue is the journey the Tattooed clone (Eric) goes on in this issue. He can be a hard character to read, since he didn't agree with Luke and mainly because he fell in love with Luke's wife, Amelia. His actions in the New Hope Fellowship church are pretty exciting and could lead to a fantastic follow-up issue, then Laura, the Coalition woman who held Luke prisoner back in issue #12, shows up. The look on Eric's face is fantastic and it's a cliffhanger that truly works and comes out of no where, unlike some other moments within this particular issue.

As always, Jose Juan Ryp (art) and Andy Troy (colors) do a phenomenal job on the art. Ryp packs so much detail into every panel. There's one page here that blew me away, as Luke heads down to the stream to wash his face off. It's a silent page, but the facial expression says everything about what's going on in this character's mind. It's the perfect beat page before the next scene. The ripples in the water look great, as well as the detail in the trees, off in the distance.

This issue was incredibly predictable. It fell into the very tired story of "good guy does something good, against his peers' recommendation, but said peers reverses all of good guy's doing." More specifically, spoilers ahead, Gamma demands Luke kill the ma and son who own the cabin because they know too much. Luke lets them go, but down the road, Kazumi kills them off. As the scenes were playing out, I kept waiting for Kazumi to show up, and she did. The scene moves the story forward and develops the eventual upcoming split between Luke and Gamma, but you can call it from a mile away.

The other problem with the issue is one I've had in the past: rarely are character's names repeated in the book. I'm not sure what the names of the father and son, who are being held captive, are and the book doesn't repeat names of secondary characters very often.

Out of the whole series, this is the weakest issue to date. However, it's still a good read. The reader will stay two steps ahead of the action, which is easily the biggest disappointment and the story moves pretty slowly. The tattooed clone's story is the highlight of the issue and what happens there will really be the focus point for readers. This is truly a book that reader's need to have on their pull list though. It reads like a solid weekly television series and at times, yes, it's going to be a bit slow, but it's all solid build up. 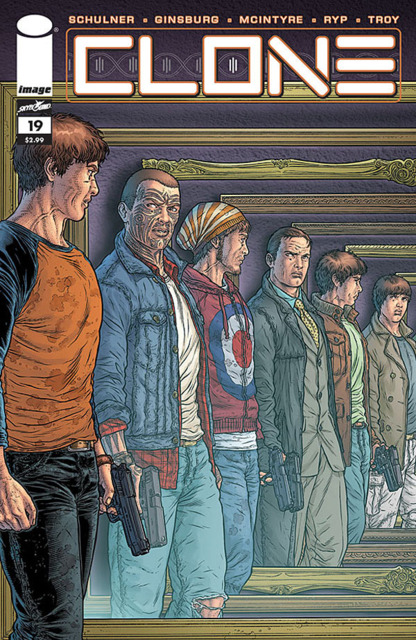