In the last issue, the new Vice President Davis, former head of the cloning program, announced to the world that the clones exist, and they all must be destroyed. Now, Luke is on a mission to find clones and bring them back to his camp: a safe place. However, getting home is not as easy as it sounds.

What's really cool about this issue is that the whole dynamic of the book has changed. The clones are on the run not just from the American government, but from the American people as well. This is apparent from the opening pages of the issue as Luke, who is helping another clone, escapes the city. They're running from the police and the public.

This later leads into a really cool scene where Luke and the clone he's helping see what happens when they deal with the "less than friendly" public on the outer-ridges of the city, in Zion, Illinois, which sounds scarier than it is. This scene really sets the tone for where the series is going and how it has expanded. If you enjoy the modern-day witch-hunt style of story, then you'll really like where this is headed.

While Luke is away, Amelia and Eric (the clone with the face tattoos) are becoming much closer. Eric has very strong feeling for Amelia, since he's the one who saved her in the last arc, but Amelia is still very married and in love with Luke, who has been on his mission to save other clones from destruction. It's a very nice little side story and gives one of the other clones a stronger personality, to set him apart from the others. There's also a really cool scene with Gamma and the other clones. Nothing to spoil here, but it's a fantastic scene that builds this new mentality for the clones.

Whoa! What's going on with the ending here? Once again, the writers of this book find new ways to expand on this world and open it up to new story lines. Lots of questions in the air now after seeing this reveal.

As always, Jose Juan Ryp does a stellar job on the book. Sadly, there's no huge "oh wow" moment from his art in the issue, but he is very consistent at telling this story. His panel compositions and page layouts have a cinematic feel to them with issue #11 more than anything else. There's some great medium shots to close-up shots from panel to panel which give the illusion of the camera moving in. I also really enjoyed the fact that a new page doesn't necessarily mean a new scene. The next scene, in a couple of cases, start right on the same page as the last scene. It gives the overall book much smoother transitions.

My main complaint about this book, and series as a whole, is that they rarely mention the characters names. Vice President Davis is only named, to the best of my memory, in one issue (#4 I believe).

One other small complaint. On page one, panel two, there's a man with a striped red shirt, but the stripes don't match the way the shirt sits on him. It's like watching an old Tom & Jerry cartoon where a character is wearing a patterned shirt, but the pattern is flat on their body. It's awkward.

CLONE #11 is another hit. The hardest sell about this book is telling readers to pick up the previous 10 issues because it's well worth it. Issue #11 is a big game changer as the American public and police force are hunting down clones. Luckily, Luke is there to help those in need. While the main story is fantastic, the final reveal page will get you really excited for the next few issues. CLONE has a great team of writers and artists working on it, and if all that doesn't sell you on it, then I'll have to assume you're crazy. Overall, I highly recommend this issue and series. 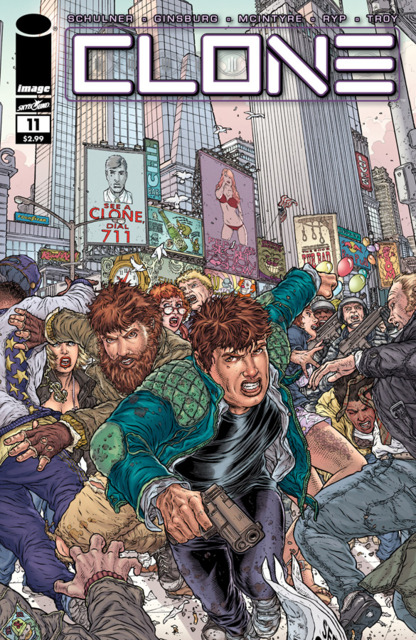