A verdict is handed down, and heroes get ready to start fighting each other.

Civil War II is the current big event in the Marvel Universe. We've seen some big deaths and plot twists, but it's still not quite enough to keep us completely glued to the series. We've seen this sort of superhero drama before. That being said, if you are looking for some major hero vs. hero fighting, you're about to get quite a bit of that.

With the murder of Bruce Banner, we find out what Hawkeye's verdict is. The unfortunate thing about this revelation is it wasn't too difficult to figure out based on the recently released Marvel NOW! catalogue. Hawkeye is shown on the cover of the upcoming Occupy Avengers series. There should be some big fallout over this. This decision could set up some pretty crazy precedent in the future. Whether or not it's used remains to be seen. We also can't help but wonder how long until the murdered character returns somehow. After all, we did see the return of Doc Samson in the zero issue with no concrete explanation on his resurrection other than, "I'm better now."

The main crux of the issue is Tony Stark's revelation on how Ulysses' powers work in predicting the future. This really draws the line in the sand despite having seen Tony and Carol Danvers approaching different characters to see whose side they'd go on in several tie-in issues. We're four issues in, five if you count the zero issue, but we won't be getting the big Civil War action until next issue.

David Marquez's art is top notch, as usual. His visuals, along with Justin Ponsor's colors really sets the tone and atmosphere in each scene. You can see Tony's struggle with his discovery on how Ulysses' powers work along with the recent deaths of his friends. You can feel the energy brewing as the action is about to be unleashed upon us.

Civil War II hasn't quite been the big event we've wanted. It might be the fact that we're constantly seeing heroes fighting each other. This difference of opinions should be a major problem but it doesn't quite live up to our expectations. It's understandable we need to have a big conflict, but Carol Danvers' reaction and how she carries herself is feeling a little out of character. The issue's saving grace is David Marquez's art and Justin Ponsor's colors. We're finally at the point where the pieces for a big fight are in place. Will it be enough to continue reading the series? 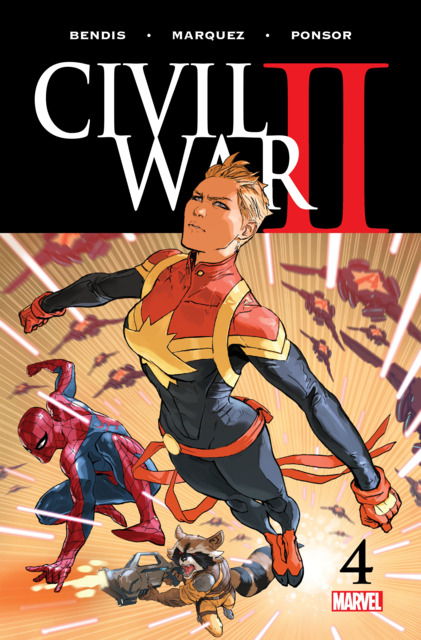