There is a divide coming within the Marvel Universe.

Minor spoilers have been blocked out.

Stop me if you've heard this one before. Actually, don't stop me. Hear me out. The Marvel Universe is about to be faced with a choice that will draw a line down the middle. Heroes will have to, once again, choose a side. This may sound like what happened before in the 2006 Civil War arc, but this time it's a little different. Brian Michael Bendis is no stranger to the big events at Marvel Comics. You can bet the stakes have been raised, and there will be some shocks and twists.

The choices that will be presented upon the heroes are, "Change the future" or "Protect the future." If they can suddenly gain a way to find out if something really bad is about to happen, should something be done to try to change that event? It soon becomes a matter of where to draw the line, or how far do you go in an attempt to stop something before it can happen. Should action be taken against an individual if they haven't done anything just yet? Is the future set in stone, or could there still be a chance things will happen differently?

While the decision seems to have been put on hold, a faction of the Marvel Universe decides to act upon information given to them. This has some fatal results. It's an unexpected surprise. Unfortunately the death of a character isn't actually seen immediately. We find out who and then are shown a flashback of the event. This does allow for a bigger impact when the news is first revealed. The outcome is we get to focus more on the reaction of the death instead of the actual events leading up to the death. To escalate the impact of the story further, this isn't even the only casualty that occurs. Because of how it's handled, it almost feels like the two casualties are more for shock value at the expense of the characters.

David Marquez's art and Justin Ponsor's colors are fantastic. The story hits the ground running and the visuals immediately suck you into the story. There is something pretty exciting when seeing an enormous amount of characters on the same page. Marvel is making this out to be their big event of the year and Marquez and Ponsor are completely on board in making that happen.

While plenty does happen in this oversized issue, there is a fast pace to it all. This keeps readers enthralled in the story, but you also get the feeling this is still just set up for the bigger story. This issue obviously is setting the stage for the event/crossover. It's not immediately clear how this one decision and the repercussions will pull in the rest of the Marvel Universe. The deaths don't involve characters who are the center of the Marvel U.

If you think you've seen a civil war in the Marvel Universe before, think again. Brian Michael Bendis is making this a bigger decision with much more on the line. There is a big decision to be made. Because some characters acted before everyone could agree, there's a price to be paid. David Marquez's art and Justin Ponsor's colors are amazing and this is a really good start to Marvel's next big event. This is just the beginning, and you won't want to miss out on what happens here. Be sure to read the issue before you see spoilers. The Marvel Universe is about to explode. The next big event is here, and there will be casualties. 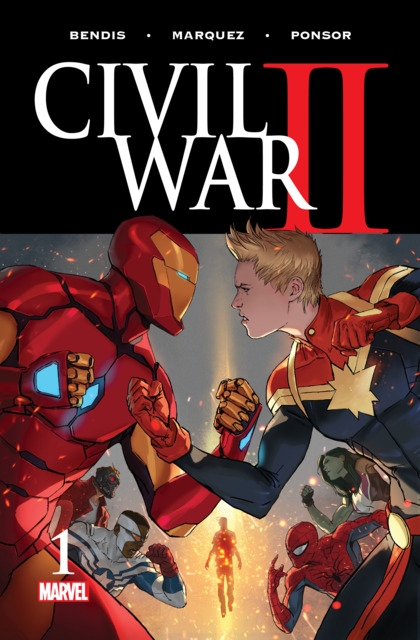