If you thought the fight between Captain America’s side and Iron Man’s, you haven’t seen anything yet. Things are much much worse.

Civil War was a big moment in the history of Marvel Comics. We have seen superhero fight superhero many times but this brought things to a different scale. It wasn’t just about one hero being able to punch another, it was more about what each hero believed in and what they represented. If you read the original Civil War story, you know how things ended. As part of Secret Wars, this series allows us to see what happened if things expanded and continued differently. The war between Steve Rogers and Tony Stark has literally divided the nation.

In the previous issue, we saw an attempt made at a peace talk between Rogers and Stark. Things were cut short when it appeared an assassination attempt was made on Rogers. The death of the woman that brought the two sides together was yet another casualty in this ongoing fight. The shot may have come from Rogers’ side, The Blue, but he was also clearly the target. Stark claims his side, The Iron, was not responsible.

With some time having passed since the events of the original arc’s ending, we’re able to see more of the results of the fight explored. We’re seeing how characters have been impacted by this struggle and evolve into more hardened versions of themselves. Charles Soule fully shows that the idea of this conflict between the two is ugly. Yet you can’t help but be captivated but each moment that passes as a result.

It’s hard to find fault when Leinil Francis Yu provides the pencils for a book. With Gerry Alanguilan on inks and Sunny Gho on colors, this is simply a great looking series. The changes in the characters are fantastic. Yu makes big changes for some and subtle ones for others. The more I see of this world, the more intrigued I am to see everything else. There are so many questions we could ask but you become so glued to each page. You won’t even mind if all those other questions don’t get answered.

CIVIL WAR is like a witnessing some close friends become engaged in a big argument. You feel bad for listening in but you can’t pull yourself away out of concern and curiosity. The original Civil War arc was a brutal and spectacular story. This series continues the fight and takes it to a completely different level. Things have gotten really ugly between Captain America and Iron Man. Charles Soule and Leinil Francis Yu are doing wonders with this book. Civil War was one of those arcs you never felt needed to be explored further. Soule and Yu have easily convinced us we need to see it continue and they are just the ones to do it. 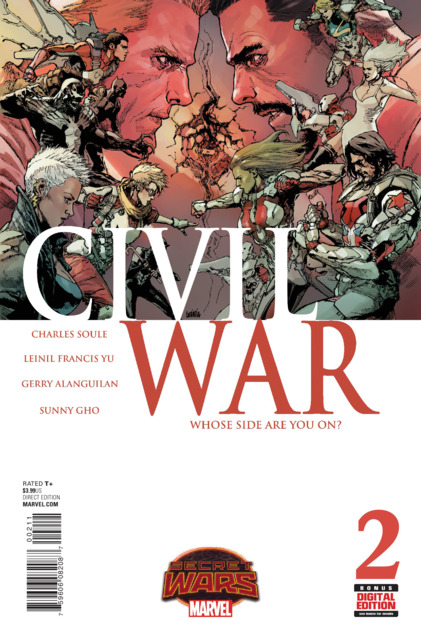