That's not Poyo, it's a stand-in lookalike.

After saving the president, Poyo heads off to a magical land filled with farming and vegetables come to life. From there, he kicks everyone's butt and remains the toughest being in the universe.

This issue is fan-service in the best way possible. If you love CHEW and Poyo, you are probably already buying this and know what to expect. The book is funny, really funny and as always with Rob Guillory's art, you have to look at everything on the page because there's tons of little things in the background that add to the scene and by "add to the scene," we mean "jokes."

While CHEW is still a funny book that tells a cool story, it seems writer John Layman took the governor off at let the insanity fly. It works though. So many times, comics try so hard to be funny and miss their mark. What makes WARRIOR POYO work so well is that it is so over the top. He's fighting giant vegetables and it's just an incredibly hilarious adventure.

Aside from all the stuff in the background, I love Rob Guillory's art style. It's light-hearted and has this devious tone to it. Every page is packed to the brim with art and it's never cluttered or confusing. The best page in the issue is Poyo pulling a skeleton out of a man's skin. It's ridiculous, but just adds to the mythos and legend that is Poyo.

The final page is undoubtedly awesome. Poyo teaming up with Rick, Michonne, and Carl? I wish that existed. I would read the hell out of it,.

The storytelling here is different. It's a lot of set-up and a quick fight and it's over. However, it's Poyo, so overall, it's more about Poyo being bad ass. That's what's important.

CHEW: WARRIOR CHICKEN POYO is exactly what you'd expect from John Layman and Rob Guilloary: a way over-the-top story that entertains the reader from front to back. Picking this up for CHEW fans is a no brainer, but those who have never read a single issue of CHEW will also really enjoy this book. If you like having a good time reading your comics, this is for you. If you don't, you need a sense of humor or new hobby. 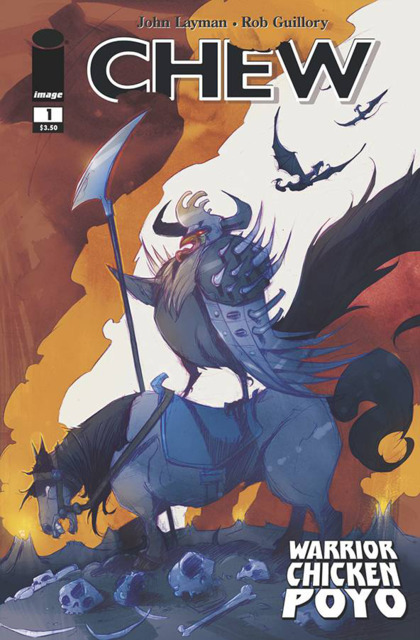