Catwoman #41 - Caesar or Nothing, Part One

The intrigue deepens and Catwoman receives some troubling news.

There was something of a cliffhanger left when Convergence began as Selina Kyle was consolidating her powers, as well as forging new alliances and relationships, that this issue handily picks right up with. The mantle of Catwoman has been passed to another, allowing Kyle to focus on running her empire while a competent ally assists in the more hands-on activities required to get all her ducks in a line. Genevieve Valentine has a great talent for writing mob politics and making it interesting by keeping the principle players to a manageable level. Rather than get into the intricacies of who’s protecting who and who owes whom what, she focuses mostly on the larger players, letting the others fall where they may. While this has the effect of distancing, it also creates a sense of intimacy and character building with the characters in the spotlight. And no one’s in the spotlight more than Selina herself when some very, very big news is delivered. Valentine really shines here, showing Kyle keep her composure absolutely before breaking down in what feels like a very earned moment.

David Messina’s visuals are sharp and detailed, a necessity in an issue like this where action is in short supply. What he delievers in its place is some of the most tense conversations this series has yet seen with great body language and facial details that often give far more detail than what’s being said (and that seems very much intentional). Lee Loughridge’s colors remain sharp and dark without getting too gritty or grim. These are, after all, upper crust, high class folks and the visuals do a great job of making them look both glamorous and dangerous.

This is the first issue in the start of a new arc, but it feels like it picks up directly where the other one left off, including a lack of context or catching up. Last issue left a lot of questions and situations still up in the air, and while they are coalescing, they almost feel like they’re doing so in slow motion.

This leads into another problem with the ending and that’s that it sets up a great deal and pays off very little. Selina’s big revelation is a great emotional climax, but it happens too early and the rest of the issue feels languid as a result.

This is a great return to form for this title with a few minor hiccups along the way. The setup might be taking its time, but what’s being set up has all the hallmarks of an absolutely fantastic, epic mob movie with one of the best reimaginings of an old, OLD character that has happened in recent memory. CATWOMAN’s strengths lie in the core cast and this issue delivers a satisfying check-in of them. While it’s not perfect, it feels like this is going to be one of those titles that, when the payoff DOES come, it’s going to make the entire journey seem even better and well worth it. 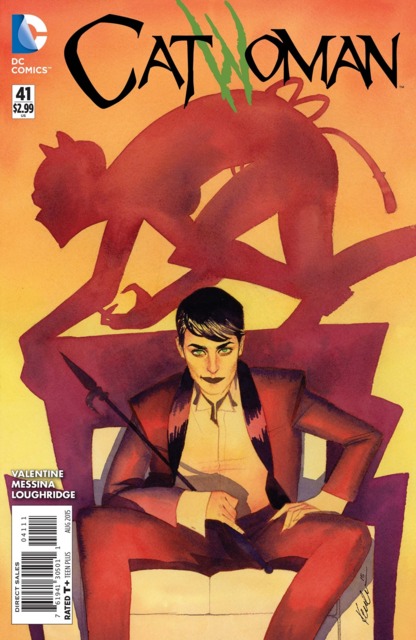