Catwoman #35 - Comfort to the Hurt of the King

CATWOMAN gets a new creative team and new direction, spinning out of events in BATMAN ETERNAL.

For months we've wondered who Catwoman was in the New 52. When last I read, there was some question over her true identity and background. The series had gone in a few different directions and I wasn't really sure what to expect anymore. With things developing in BATMAN ETERNAL and the change for Selina we first saw in the slight future story in BATMAN #28, it was a matter of time until those events caught up with Catwoman's main series.

Walking into this issue, you don't necessarily have to know what happened before in the series. I actually went back to check out issue #34 (and I did read the FUTURES END issue). This is more of a slight continuation from last week's BATMAN ETERNAL. Selina is embracing her true heritage as the "Daughter of the Lion," Rex Calabrese. Gotham City is a mess and she wants to use her true family name and contacts to establish a new position for herself. That's what we're seeing in this issue. Seeing this evolution of Catwoman is surprising (even though we knew it was coming) and it definitely grabs your attention. There are moments you might say, "What the heck is going on?" but it's a nice shift in the series. I'm deeply interested to see what Genevieve Valentine has planned for Selina.

Garry Brown's art fits the new tone perfectly. There's a great balance between the grittiness and beauty of the story being told. Catwoman is often drawn in a sensual way but that's clearly not needed here. She still exudes the confidence we would expect and you can tell she is determined to get the job done.

I mentioned the moments of slight confusion. We immediately see Selina with a new supporting cast. I wasn't sure exactly who they were or where they came from. Hence, the reason I looked back at the previous issue). Who they are is explained. Perhaps we'll see more of them in the coming issues to fully find out who they are, assuming we haven't seen them already (I've missed some issues of BATMAN ETERNAL due to the weekly schedule).

It's time to check out CATWOMAN once again. There's a new creative team and a whole new direction for Selina Kyle. As we see her make her move to try to fix certain things in Gotham City, there's also an element of mystery going on. The new level of complexity being added to her character is something we will relish. Garry Brown's art fits the tone of the story nicely. If you've been wondering what Catwoman has been up to lately, this is a great place to jump in. There may be some tiny moments of confusion but you'll want to stick around to find out more. 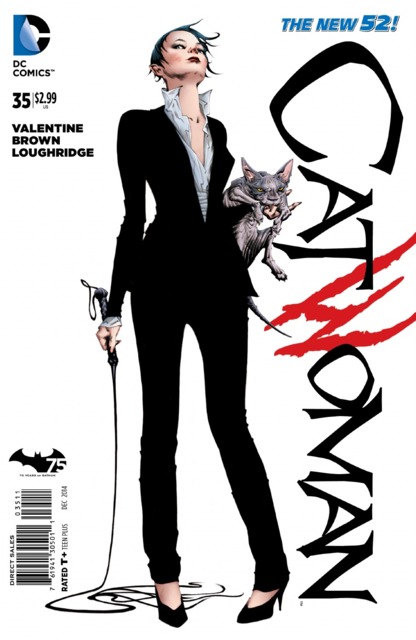