Catwoman #25 - Zero Year: Before the Claws Come Out

It's a journey back to witness a slight turning point for Selina Kyle in the days before she became Catwoman.

At first the idea of Zero Year tie-ins caused my eyes to roll. I didn't see the value in going back again to individual characters a certain period of time before they gained their costumed persona. For Catwoman, we get to see more of who the character is meant to be.

This is Selina Kyle. She straddles the line between being good and bad. The funny thing is, my daughter actually asked me yesterday if Catwoman was good or bad. I explained that she was a thief but she wasn't evil. That is the essence of who Selina is, in which John Layman lays out in this issue.

In the moments during Zero Year, Gotham City is in turmoil. With the Riddler having turned off the city's electricity and a raging storm on the way, there is some panic as citizens scramble to find shelter from the storm as well as get any supplies they may need. Selina finds herself pulled into a situation where she comes across some bad individuals. This is where we see the goodness inside her. She can't resist trying to do the right thing for those that need it. During the story we see some 'first moments' for Selina as well as a little nod to, what I believe is, the current story with the underground city.

Simply put, this felt like a Selina story. After reading the zero issue, I'm not exactly sure what Selina's full origin is. With this issue, it doesn't matter. You can jump right in and appreciate who the character is.

Aaron Lopresti's art fits the story nicely. We see the city on the verge of a dark time and it's great seeing different areas of the city have their own feel rather than be drawn the same in each issue. Gotham is a big city and it does feel like the events here are happening in their own little corner. Lopresti also captured Selina's look despite not having an actual Catwoman costume.

This issue was a nice break from whatever is going on in the regular series. Seeing this early moment in Selina's career was nice but it doesn't feel as if it'd have a huge impact on the rest of the series. It's not crucial reading but it was great seeing the Selina I used to know.

I thought the Zero Year tie-ins would all be unnecessary filler issues. John Layman shows he understands who Selina Kyle is and gives us some nice moments before she created the costumed persona of Catwoman. Seeing her compelled to do the right thing in her own style was a great reminder of some of the Catwoman stories we had before. Lopresti's art manages to make the story feel like a CATWOMAN story even though that identity doesn't exist yet. This was a delightful surprise. 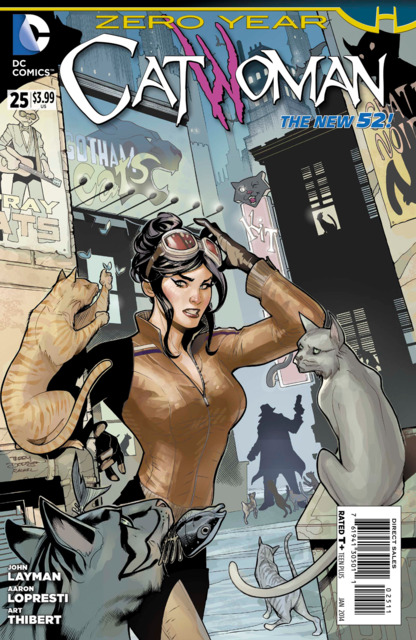