Cap continues to try to adjust to the present time period but jumps at the chance to investigate someone using his tech.

Now that Captain Midnight's first mission in the present day has ended, there's more room to build up his character along with the world around him. Joshua Williamson does a great job, in a small space, in showing the adjustment period. For a guy that lived in the 40s, there is a lot of differences for him to face. While the technological advances don't phase him, the difference in social etiquette really adds a more realistic touch to the character. This allows him and the other characters to feel more real and allows readers to start feeling like they're getting to know them.

Williamson also shows the character in actual downtime. Rather than have him immediately jump right into another situation, we see that he is somewhat restricted in what he can do due to his status with the authorities. But he won't be sitting around the entire issue as he soon figures out a way to investigate a mysterious individual using his flight-suit tech.

This issue marks a new creative team of Eduardo Francisco on art and Stefani Rennee on colors. We get some cool scenes and layouts. (Check out the process for a couple pages HERE).

Some of the interaction/dialogue between Captain Midnight and Skyman felt a little weird. I get that Skyman is supposed to be a true patriot but some of it felt a bit much. "War never really stops...it merely takes on new forms." They seem to come to terms too quickly, even though there is still some doubt amongst each other.

Captain Midnight's trip to New York and meeting with Skyman felt a little sudden as well. Obviously we wouldn't want Captain midnight sitting around for the entire issue but it felt a little convenient.

I did like some of the vibrant colors but there were some moments it was a little too much and a couple panels where the inks felt too thick.

Captain Midnight is starting to get situated in his current situation. Having journeyed into his future (our present), we're seeing him adjust to the little things, which adds more human nature to the story. Joshua Williamson is able to flesh out this comic world with the supporting cast and the meet up with Skyman. The artist and colorist give an impressive debut on this series and it's all starting to feel like it's finding its groove. And it should be mentioned there's pretty a crazy cliffhanger ending as well. 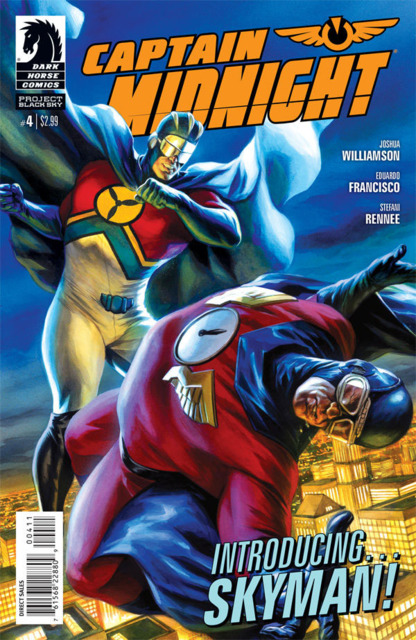