Captain Midnight has a pretty obsessed enemy. Throw in deadly polar bears, you know things are going to get messy. Find out more on Captain Midnight's journey to the present.

The first arc ends and we do get some answers as well as some more questions. We've seen the idea of a hero from the past somehow ending up in the present but there is something about this that feels a little more natural. Captain Midnight still feels like a man from the past but due to his extreme intelligence, he also seems to fit right in the present as well.

Joshua Williamson delivers some strategic flashbacks at just the right moments. There is still a bigger mystery and with the bits of information laid out here, you'll have an even bigger reason to come back to try to get more answers.

It's also great to see that as mighty and formidable Captain Midnight is, he doesn't come across as the typical hero that has no fear of losing. The fight sequences capture just the right amount of difficulty for the Captain so while you feel he will end up winning, there is that feeling that maybe it won't turn out so well for him.

Fernando Dagnino does a good job laying out the scenes. Golden Age heroes can sometimes look cheesy but Captain Midnight doesn't surfer from that. There's a good mix of the old-timey feel mixed in with the modern times.

As the fight rages on, it almost ends too abruptly. As this is the final part of the first arc, we do need some closure to the fight with the build up for the next story but it still came across as a tiny bit too convenient for the Captain.

I don't really recall having any problems with the colors before but there were some parts that were almost too colorful. Some of the backgrounds are too focused on the primary colors, too much orange, red and blues. This gives some of the scenes an artificial feel.

It would be nice if Fury and Charlotte didn't have the typical comic book female figure. They also seem to wear tight-fitting outfits that show off how fit they are.

I had questioned the casual nature of Captain Midnight suddenly appearing in the present but as we get to see him in action more along with some flashbacks, we're getting a sense of the bigger picture. The more I read of this series, the more I want. With the slight reveal we get here, you'll want to know more. I didn't know anything about Captain Midnight before this series and it's great seeing this character come to life in this series. The tease for the next issue promises a change in story that should offer some nice variation to the series. Too bad we have to wait a month for more. 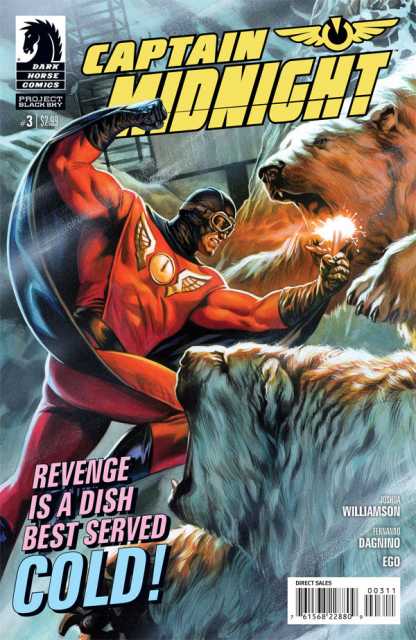