Captain Midnight somehow ventured from the past into the present. The search is on by the good and bad guys so the Captain will definitely have his hands full.

Beginning with a flashback to 1942, we get the chance to see Captain Midnight in full action. This allows readers to immediately see what he is capable of. There is a great mix in terms of the vibe of the story. Being a classic "pulp" character, you might expect a slightly lighter ton but that definitely isn't the case. With Captain Midnight fighting Nazis, it's expected to contain some violence. Fernando Dagnino's art and Ego's colors lighten things up so it doesn't come across as gritty or gratuitous.

Another fun aspect is the fact that Captain Midnight was thought to have simply disappeared during the war when he actually (somehow) traveled through time to the present. When a character tries explaining this to another, the reaction is what you'd expect.

One factor from the zero issue was the fact that Captain Midnight was completely calm about having traveled in time. Granted he is an extremely intelligent guy and could probably understand the existence of time travel. Maybe because we haven't seen his thinking right before it happened. This could all have been part of a plan. It was nice to see another character mention the fact that the time travel should be a shock to him.

Maybe it is the time period this character's from but it felt a little cheesy when the the bad guys reveal themselves in one scene. It has that big old-timey feel which would be acceptable but the art makes the story feel like it should have a modern touch. The same could be said for when Captain Midnight says, "How dare you." Again, it fits the character but pulls you out of the story a little as you try to sort out if this was written today or some years ago.

Readers that missed out on the first chapters in DARK HORSE PRESENTS (which were reprinted in CAPTAIN MIDNIGHT #0) might feel as if they're missing out since that dealt with him arriving in the present and running off on his own.

CAPTAIN MIDNIGHT is bridging the gap between old classic pulp characters and modern comics. Josh Williamson has taken a character that (in the story) was last seen during WWII and has somehow traveled into the present. Whether it's intentional or not, Williamson gives the Captain a feel as if he was actually written back during that time period. The art and colors makes the story feel completely in the present and we're seeing the mystery of Captain Midnight's mission unfold. CAPTAIN MIDNIGHT is a fun series and you should definitely check this out and be sure to track down the zero issue. 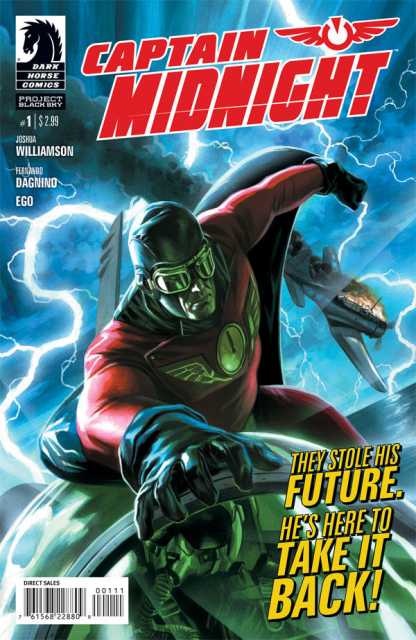