Get ready for fun and excitement as we discover who is Captain Midnight and how he ended up in modern times.

Captain Midnight first appeared in 1941. I'll admit, I didn't know anything about the character before reading this issue. Josh Williamson has the task of bringing this old timey character into modern times, literally.

We get thrown right into the action as we discover the WWII hero arriving from the past. How can this be? Where has he been? This is all stuff we slowly will be discovering.

What makes Captain Midnight cool is he's more than just a swash buckling hero. He's also an extremely intelligent inventor. You would think the average person would flip out a little bit to find themselves shunted years into their future. Captain Midnight is more the type to take notice of the progress, or lack of progress, in today's technology. They mystery of his 'final' mission and what it means that he's arrived in the presence is the hook that will make you want to return for issue #1.

Originally appearing in the pages of DARK HORSE PRESENTS # 18-20, the issue is separated into three chapters with art by Victor Ibanez and Pere Perez. I honestly didn't really pay attention to the difference in art because I was sucked into the story and the colors were by Ego in all three chapters.

We seem to be getting a few different pulp characters pulled into the future these days (Miss Fury, the Owl). It'll be interesting to see how this differs from those as they seem to have different reasoning. We'll also have to stay tuned to see how the vibe of this book continues once we discover the whole story and reasoning for Captain Midnight's presence in the...present.

Captain Midnight may be a highly intelligent man but he seemed completely at ease at being in his future. His arrival seemed to be easily accepted by others as well. This could be all because we readers don't know the full details of his last mission.

Get ready for some high flying adventure and mystery as Josh Williamson and Dark Horse bring Captain Midnight into the present for new adventures. There is a big mystery as to how and why he's arrived. This is something that will be uncovered throughout the series and watching it all unfold will be interesting. This issue collects the three-part story originally seen in DARK HORSE PRESENTS. After reading, you'll be ready and waiting for the release of next month's issue #1. This is your chance to get in on the ground floor to see what the future holds for this classic character. 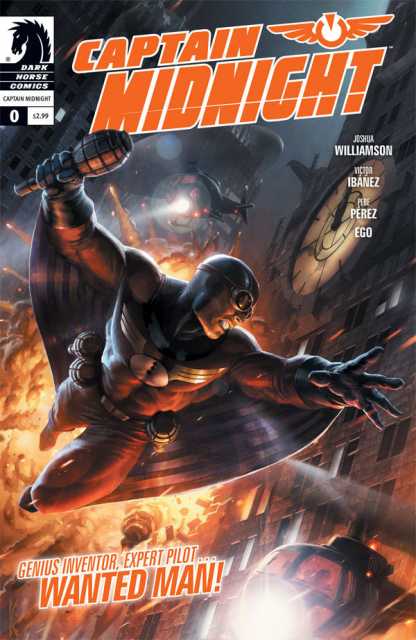