Plague and vicious planetary in-fighting may not be a target that Carol Danvers can deal with directly, but she may have just found one she CAN.

Carol Danvers has learnt a hard lesson: not every problem that needs the attention of an Avenger can have a straightforward solution. Case-in-point: the planet Torfa has been afflicted with a terrible plague after fleeing the Builders’ destructive path through the galaxy. Do they move again, abandoning the infirm to their grisly fate? Or do they stay and work toward a cure that may never be, risking the lives of every single survivor? How can Captain Marvel, with all her power and compassion, provide an answer to such a multi-faceted question? Kelly-Sue Deconnick may not have ALL the answers, but she’s definitely found a great way for Carol to help. More importantly: we get further insights into exactly what’s been going on on this planet and, specifically, why the Spartax Empire has such a vested interest in it as well as the source of the plague that’s been tearing apart of the populace. Amidst all this, we get a few more glimpses of her newly introduced supporting cast, and even a brief look at where Tic landed after last issue as well as the political dealings of the Torfan government. It’s a ton of content, but it never feels forced or rushed, DeConnick writes in such a way that every piece feels like the centerpiece.

David Lopez’s linework continues to be an exercise in the beauty of simplicity. This is going to sound like the world’s most back-handed compliment, but with this style I can see how he’s managed this consistent of a work output. And let me be clear: I am amazed by his style. His linework’s got a beautiful simplicity to it that is also incredibly detailed, but in an economic way. This is likely why these two creators work so well together: DeConnick’s writing does a lot in very few words just Lopez’s does a lot in just a few lines. He “paints” (or draws) in broad strokes, but they don’t lack for detail and all of the character designs in this issue are excellent. We also get colors from Lee Loughridge, and this is another style that is perfectly in synch with the other two: the colors are bright and beautiful and look simple on the surface, but actually have a great deal of nuance. The eye of the reader moves effortlessly from panel-to-panel, but it never feels like anything is being missed or skimped out on.

As much as I don’t think anyone got short shrift per se, I would’ve loved to have seen more focus on Danvers’ new running crew introduced last issue. We get some great moments from other characters, but I feel like they, while great when they appeared, could have used just a little more time. I also would have liked for there not to have been such a straightforward answer to Torfa’s problem. Part of the fun of these issues was watching Carol struggle with a problem that required answers she couldn’t immediately punch, and while I can’t wait for her to start throwing energy blasts around, it would have also been nice to see her realize she would have to learn a whole new way to help them.

This book remains an absolute joy. As much as I would’ve liked to have seen it go another direction, I can’t deny how amazing the final four pages are to see. The marriage between visuals and writing go far deeper than simply showing what was (likely) in the script as each creator is complimenting the others perfectly, making this book move with a subtle grace that’s hard to pull off at the best of times. This is actually also a “jump in anywhere” story, you might not get ALL the nuance or references, but I’d say that it’s approachable enough to start anywhere (and then frantically seek out any issues you had missed). 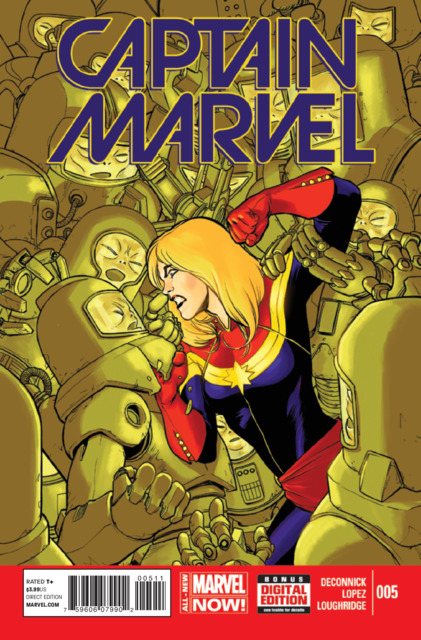