Captain America: White #1 - You Can't Take it With You

After many years, the Jeph Loeb/Tim Sale story is here.

Back in 2008, we got a glimpse at the latest 'color' story from Jeph Loeb and Tim Sale focusing on Captain America and Bucky in CAPTAIN AMERICA WHITE #0. Like their past collaborations, this series set out to look at the characters at an emotional level while also telling a grand story. Unfortunately after the zero issue, we never got the first issue...until now.

For fans of Cap and this creative pairing, it's worth the wait. The story may look back at Steve's awakening after the Avengers found him frozen and his dealing with the loss of Bucky but there's still plenty to hook you into the story. Loeb and Sale immediately set up a special kind of vibe in their stories. Getting to journey back to see Cap, Bucky, Nick Fury and the Howling Commandoes is great. Because this is a story set in the past and a look at the emotional reaction of losing Bucky and awakening in a new world, the wait for this issue is easier to accept. There's loads of nostalgia as well, especially considering Steve's current status in the Marvel Universe.

Adding to the story and art is Dave Stewart's colors. With color being a huge element in the Loeb/Sale stories, you want and expect some amazing colors. Amazing colors is what we get.

Obviously the delay has been troublesome for those that have been waiting. I honestly had forgotten what happened in the zero issue. The good and the bad thing is the complete zero issue is presented here after the 24-page main feature. That means you get an extra seventeen-page story along with the thirteen pages of art and interview with Loeb and Sale that was included in the zero issue. This all is the reason for the $4.99 price tag. If you haven't read or bought the zero issue, this is a great inclusion. Even if you did buy the zero issue, I'm glad to see it included here again so I don't have to try to figure out where my copy is. There is also the minor issue that Bucky's past has been tweaked a little during Ed Brubaker's run but that doesn't take away from the enjoyment of the story here.

CAPTAIN AMERICA: WHITE #1 is finally here. Jeph Loeb and Tim Sale's continuation of looking deep into what makes our favorite characters tick is as wonderful as it was before. It's a joy to revisit Steve Rogers as Captain America and seeing the emotions of awakening in the modern age and losing Bucky along with some action-packed adventures set in the past. Dave Stewart's colors are amazing and highly complement the story. It's still a little frustrating for those that have waited so long but the inclusion of the zero issue from 2008 allows you to recall what was shown before. Even if it wasn't included, not reading it doesn't take away from the story. While there is plenty of content, it does add a tiny increase to the price. It is worth it but could be a concern for some. Now that the first issue is here, let's hope we will indeed get the rest of the story. With the direction of the story now set up, it's going to be fantastic to see what happens next. 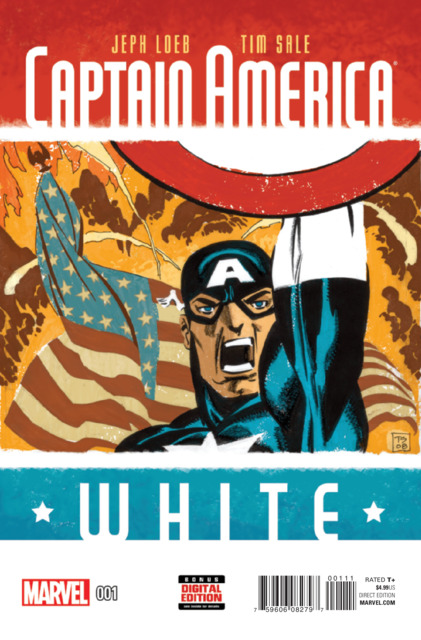