By now, Captain America's loyalties aren't much of a secret to readers. If you still haven't heard, you should stop reading now.

With the revelation that Steve Rogers' past was re-written by the sentient cosmic cube Kobik, we now have a Cap that is loyal to Hydra. It's a fascinating story even if it's a little difficult to accept Cap in this fashion. Trying to keep true plans a secret from the other heroes would be hard enough on its own. He has to deal with the fact that Jack Flag could awaken from his coma and reveal it was Steve that pushed him out of a quinjet. Things aren't getting any easier with the existence of an Inhuman that has visions of the future. If his plans are seen, it could blow his entire cover.

Nick Spencer tells two stories within the issue. We get to find out more about Steve's new past as a child growing up within the ranks of Hydra as well as how his actions play out between the panels of Civil War II. With some of the tie-ins, we see many of the big moments replayed. Spencer gets to give the replay a new twist. It doesn't feel like rehashing events. Instead, it's a new way of looking at how those events really occurred. Seeing this new Cap weave his way through his own agenda is a little eerie.

Javier Pina and Rachelle Rosenberg do a great job with the visuals. The flashback scenes have an interesting vibe to them. The current day moments are filled with subterfuge and tension as we witness the dark events unfold.

It's not easy seeing Captain America carrying out his new mission. Seeing him unleash his dark plans goes against everything fans of the character expect. That's the fascinating part of this story and what makes it impossible to look away. Because we care about the character, it can be difficult to accept the situation. With this Civil War II tie-in, Nick Spencer amps up Steve Rogers' dark ways. We see more repercussions over his actions and how they're influence the rest of the Marvel Universe, unbeknownst to everyone. Javier Pina and Rachelle Rosenberg capture each moment nicely and give us a new perspective on how certain scenes really played out. This book delivers a dark journey for one of Marvel's greatest heroes. Each issue pulls you in deeper and you can't help but wonder what's going to happen next. 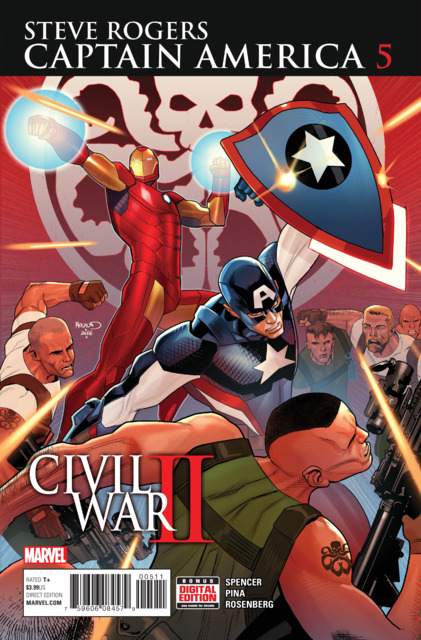