The latest Marvel Studios film gives you pretty much everything you asked for in a superhero fight movie.

This is a spoiler-free review.

The latest Marvel Cinematic Universe movie has been unleashed upon us. Even with the big number of movies in the overall franchise, Captain America: Civil War has felt like an overly ambitious film from the beginning. We expect to see a large cast of characters in the Avengers movies, but this was supposed to be a Captain America solo movie. The good news is, Anthony and Joe Russo manage to exceed our expectations with this latest installment.

The superhero films these days feel like they're becoming overcrowded with characters. As we see each installment in the franchise released, the solo movies now feature team-ups and cameos. With all the Marvel characters in this third Captain America movie, it could have been considered the third Avengers film. What it really comes down to is, it doesn't matter what you call it. We get a jam-packed action movie with all the elements we've come to enjoy: action, humor, character building, suspense, and some heartache.

With Captain America: The Winter Soldier, the Russos took the Marvel Studios films to a different level. It's not often you have a sequel that's better than the original. With Civil War, they've upped the ante even more. Unlike other action films loaded with a vast number of characters, one of the advantage the Marvel films have is we have a great understanding of who they are in this cinematic universe because of the past films. Despite this advantage, there is still a lot of character building going on, especially with newer characters like Scarlet Witch and Vision. We still have more to see. New characters like Black Panther and Spider-Man are introduced (with fantastic results). Older characters even see some growth as well.

The main crux of the movie may be Captain America's team and Iron Man's team fighting each other, but there is much more going on. There's obviously a bigger reason to everything happening, and it all unfolds nicely. There are different elements to the plot with different locations and developments that occur. You can easily say that the repercussions from this movie will still be felt the next time we see any of these characters on the the big screen.

The fight and action scenes are on a grand scale. What drives each blow and impact home is the fact you care about these characters. We've gotten to know the older characters pretty well and the new ones become more and more likable. Seeing the friendships between them get torn apart is nearly heart-breaking. Each character has their own motives and sense of beliefs as to why they chose the side they're fighting on.

Captain America: Civil War shows the Marvel Cinematic Universe isn't slowing down any time soon. The stakes have been raised and action and drama delivers what you want. Is it perfect? Nothing really is, but this comes pretty much as close as you can get. I always said Captain America: Winter Soldier was the best Marvel Studios film. That title has now been given to the Russos' latest venture. Even with an overabundance of characters, the movie doesn't skip a beat. The characters and movie universe are allowed to grow even though there is so much action happening. This is what Marvel (and superhero movie fans) want and deserve. I can't wait to see it again. 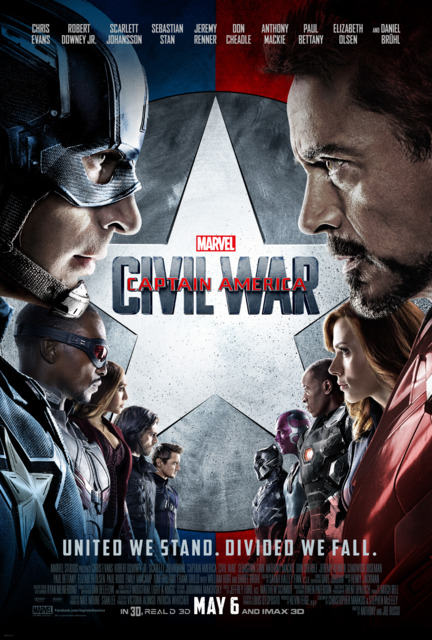