After last issue's surprising ending, how will Captain America recover from what happened?

With the end of this story approaching, a big question has been what will happen to Cap after spending over a decade in Dimension Z. There has been some speculation as to what has and will happen. That's part of the fun that Rick Remender has crafted in this story. On some levels you don't want to accept what could have been happening yet on another, Remender would be the one to be able to pull this off.

We're now seeing Cap at his lowest. Too often comics become predictable but here, you really have no idea what Remender is cooking up. We know Cap always finds a way to overcome whatever incredibly crazy odds are stacked against him but you truly feel this could be the story that breaks him down.

John Romita Jr's art here truly works, for the most part. His breakdowns along with Klaus Janson, Scott Hanna and Tom Palmer doing the finishes captures the raw brutality of the story. This isn't a walk in the park and you can feel all the pain and bruises Cap and the others are feeling.

We're almost at the end of this story. There's a strange turn of events for one character. It makes sense in some ways but felt too sudden and extreme after everything we've seen.

Minor concerns over the art. While it does "work," as I mentioned, there are still some moments it's a bit much and the designs of Zola's creatures and the Phrox still don't sit well with me.

Rick Remender is cooking up some crazy stew in this title. It's hard to believe it's been nine issues already. The way the story has been developing, there's no telling what might happen next or how it's all going to end next issue. Romita Jr's breakdowns do capture the brutal vibe of the setting of Dimension Z. The questions of doubt in the story I've had for several issues rear their head in the actual story and part of the fun is not knowing if their valid questions or not. Things took a big turn last issue and we'll have to wait until the conclusion to see what Remender has planned for all this. It's a great feeling being excited for a CAPTAIN AMERICA story again. 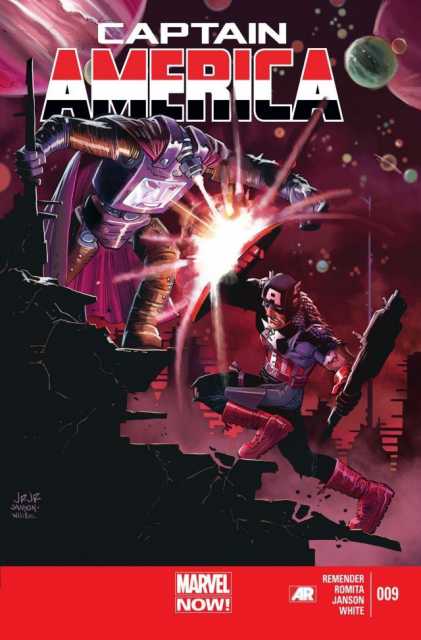