Captain America is nearly beaten but he will not stand down when it comes to taking on Arnim Zola in Dimension Z.

Rick Remender is putting Captain America through the ringer. We're now on the seventh issue of his run and we've seen Cap struggle through over twelve years in Dimension Z. He has been raising Arnim Zola's "son" and fighting the environment and the fact that he's been infected. Cap has always been a strong willed fighter but this fight isn't going too well for him.

That's what makes this more and more fascinating. When Remender took over writing Cap, rather than simply continue to tell the same types of stories, he placed him in a strange and different environment. Cap is someone that will take on any odds and won't give up the fight. We've seen this demonstrated throughout the story as well in flashbacks to his youth.

Now Cap has something more personal to fight for rather than just fighting for the good of mankind - Ian, the infant he's raised as his own son. As Zola's plans near fruition, Cap has his hands full trying to reach Ian as well as take on Jet Black (Zola's daughter) and trying to ensure he can survive to save the day. It's tough seeing Cap in this state but in reinforces how much of a fighter he is.

You can feel the pain and struggle Cap is going through in John Romita Jr's art. Cap looks like he's at the end of his rope. I've had some issues with the art before and there still are some here but his pencils along with Scott Hanna and Klaus Janson's inks (and Dean White's colors) really establish how rough this world is.

There's a flashback to 'two years ago' and Ian, with his long hair, looks like a girl. His head still appears a little large compared to his torso. Zola's 'creations' just don't look intimidating enough.

As a Cap fan, it's hard seeing him in this state and wondering how he'll come out of this after such a long period of time. But this is more about the idea and not something to be held against the issue.

What the heck does Rick Remender have planned for Captain America? Cap is going on a crazy ride in this series and that's what makes it so interesting. Too often we tend to get almost predictable stories or arcs but with this, I have no idea what Remender has planned to end it all (well, I do have one theory but we don't need to get into that here). John Romita Jr's art is growing on me in this series. The inks by Hanna and Janson along with Dean White's glorious colors make the pages vibrant despite such a dour situation. The intensity of the story is building up and I'm on the edge of my seat, stuck waiting for the next issue. You have to love seeing a character's book shaken up from time to time. 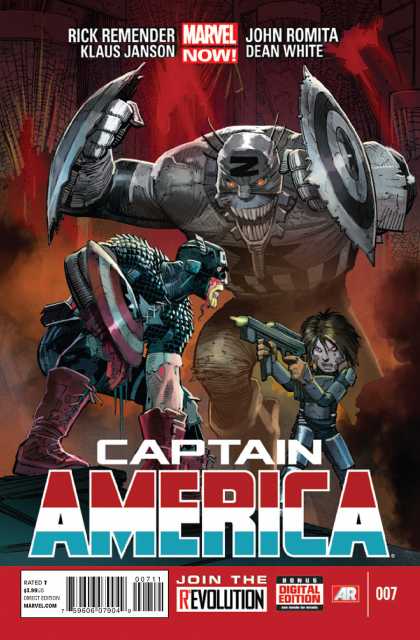