Zola attacks New York and a hero makes a sacrifice. Oh, and there's a new Captain America here as well.

It's hard to believe this is the twenty-fifth issue of Rick Remender's run. There's no denying that Steve Rogers has been through quite a bit. There's a nice bit of closure as we see the end of the battle against Zola and see the series set the stage for the next chapter. There are some goodbyes along with moments to celebrate with a new Captain America making his debut.

There's a nice change of pace in this issue. The fight with Zola isn't the main focus. With this drawing a close to this volume, it's not a complete conclusion to the entire story. Some characters may be departing but it's definitely left so that we'll need to see some follow up in the near future.

What Remender does a little differently here is show us the lighter side of life in the Avengers. Steve has to make his announcement about stepping down as Captain America and we get to see a huge number of Avengers get together. I can't remember the last time we got to see all these characters together without there being a huge event to push the story.

Carlos Pacheco and Stuart Immonen's art is great along with the color by Dean White, Veronica Gandini and Marte Gracia. I always admire when a large number of characters are present and each retains their own feel. There are moments of mixed emotions playing across different characters faces and you can feel the outrage and happiness at different times. When the 'new' Captain America makes his on screen debut, it's pretty glorious. There's even a comment about the surprise of the revelation.

But if you think you know the whole story, there's major seeds being planted in the issue's epilogue.

Yeah, there's the slight continuity issue with Steve Rogers and Captain America. It's not worth dwelling on. We should focus more on the story at hand rather than how this fits in with an issue of ORIGINAL SIN.

The mystery on the cover is still odd considering we've known the secret for some time. I mentioned this is addressed inside but it feels like a lot of hype was given when the trumpets for the announcement have already been blown. These sort of announcements pretty much always come out in advanced but it feels like we've known for some time. That took away some of the fun and excitement in seeing actually happen.

On a personal note, and not affecting the score, I'm not thrilled with Steve having aged and a replacement being needed. Yes, I am intrigued to see where the story of the new Cap will go but Steve keeps getting kicked out of his role so often.

This is a big moment in the life of Captain America. We knew it was coming. Steve Rogers makes it official that he's stepping down and a "new" Cap is announced. What's next for Steve? Of course you'll have to read to find out. As a finale to a volume, this had a nice change of pace. Steve and the others had to deal with Zola and his attack against New York but it was nice to see more of a focus on Steven and the Avengers instead of dwelling on another battle. Carlos Pacheco and Stuart Immonen do this momentous issue justice. The next phase is set up but there's still more we'll need to see with the current plot. There may be a new Cap but with the way this issue ends, it looks like he's not going to have it easy. 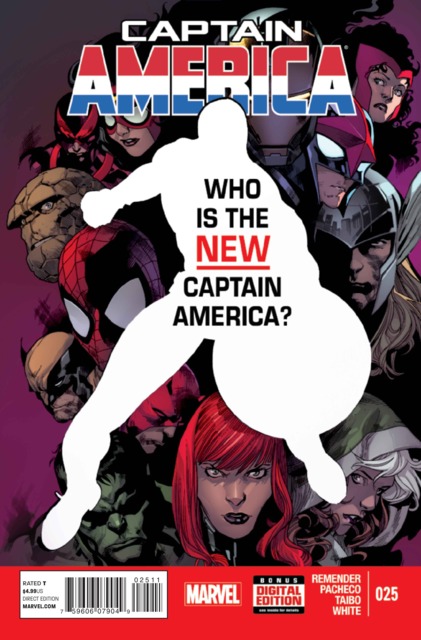