Back from Dimension Z, Cap continues to adjust to his new situation. Meanwhile, another situation is brewing involving Nuke and you can bet it's going to be explosive.

Captain America has been through hell. He spent over a decade in another dimension (time passed by differently) and also suffered the greatest loss you could imagine. We're so used to Cap always being the man in charge. It's strange and also a little fascinating seeing him broken down to this level. We imagine he'll pull through eventually but the question as to how much can a person take comes up. The addition of Jet Black, Arnim Zola's daughter, gives Cap a strange connection as well as giving the Marvel Universe an interesting new resident.

While Cap is trying to adjust, we're seeing more of the story with Nuke develop. There is something going on with him. There's is more to his story than we're aware of. As we seem more of it unfold, we can only imagine what this will mean for Captain America. Clearly the two will have to face each other but seeing Nuke in action, you have to wonder if Cap will be ready. There's definitely a mystery brewing here.

Carlos Pacheco handles the art in a terrific manner. Even simple scenes with Cap and Falcon talking look wonderful. The action scenes with Nuke explode off the page. The colors by Dean White and Rachelle Rosenberg also bring the story alive.

It may be interesting to see Cap trying to adjust. Having him suddenly bounce back would be a complete disservice to those that were lost as well as to readers. Hopefully we'll see him closer to his original form as it is a little heartbreaking seeing him suffer.

This is only the second issue after Dimension Z but there is still a slight disconnect between Cap and Nuke. We need Cap to get settled and adjusted but it feels as if we have two completely separate stories going on with no connection.

It's not the fault of Pacheco's art but Cap's helmet is still taking some getting used to.

Captain America went through a horrific time in Dimension Z. While other writers might have the hero suddenly bounce back from tragedy, Rick Remender shows us the pain Cap is going through. There is also more to the build up with Nuke and we can only imagine how his story will collide with Cap. Carlos Pacheco's art is a welcomed sight and it just keeps getting better and better. There's no telling what Remender has planned for Cap next and that is what makes reading this series so fun and exciting. 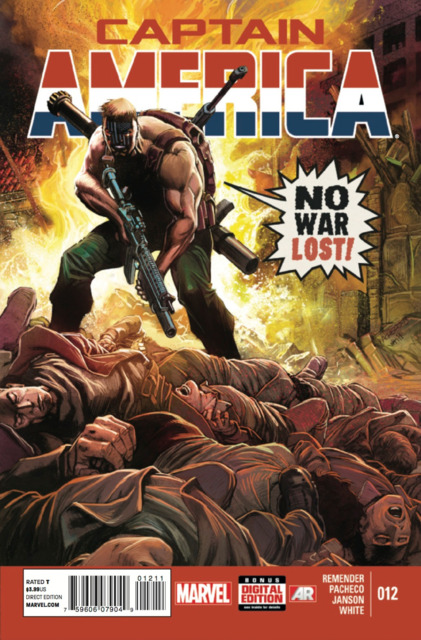