Captain America is out of Dimension Z and it won't be an easy transition. Rick Remender shows there are serious repercussions and that the story is not quite over.

Closure is a good thing. Repercussions from major story lines are crucial as well. Even though Rick Remender's ten-issue story of Captain America fighting Arnim Zola in Dimension Z is over, there is still more to see. Thinking about the possible affects of this period in Steve Rogers life is astounding. Cap has seen and done a lot but this is an adventure and experience like none that he's faced before. The solicit description of "a man further out of time" raises some interesting questions. It's great that Remender is going to touch on how this affects Cap rather than happily move on to the next adventure.

For so much that happened, this issue does a great job in tying up the immediate loose ends. Cap was left in a pretty ragged state. Jet Black came back with him. There's a lot that has to be dealt with, including the loses suffered before diving into the next arc. That isn't to say it's all about recovery. Remender does indeed begin the next arc which means setting up a story involving Nuke. Just thinking about the possibility of this story is enough to make you giddy. The combination of tying up loose ends, setting up the next arc along with a couple moments of humor made this a highly enjoyable issue.

Carlos Pacheco's art and Dean White's colors are phenomenal here. Captain America looks almost regal and you can see the pain from the recent events hiding behind his eyes. Even seeing Nuke powered up is great. I've never been the biggest Nuke fan but I can't wait to see more of him after this.

The Dimension Z arc was a bit of a roller coaster ride at times. There are some serious consequences to deal with and it's great to see the next arc hit the ground running. There's not really anything to complain about.

With each issue of this Captain America series, Rick Remender wins me over more and more. It's great seeing some follow up from the previous arc rather than just immediately jumping into the next one, something we've seen other writers do in other series. Remender adds a certain level of humanity into his version of Cap and seeing this tough old soldier continuing the fight while trying to deal with everything is incredible. Carlos Pacheco's art and Dean White's colors makes a great issue even better than you'd think possible. There is still more to see. There should be more fall out for Cap as he continues to deal with his time in Dimension Z. Seeing this finally play out in the current Marvel Universe will be fascinating. The next issue can't get here fast enough. 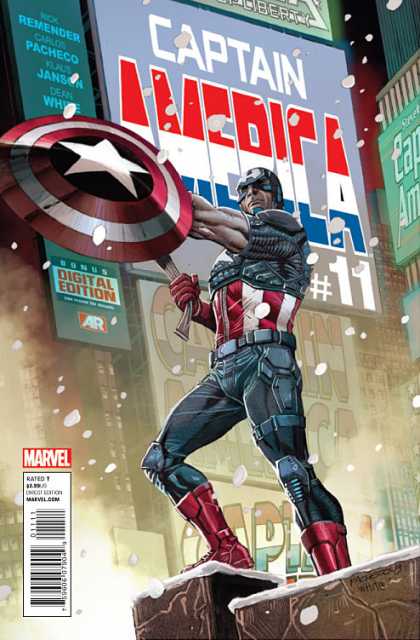