It's time to say farewell to Dimension Z. This is where we find out what Rick Remender has been cooking for Cap.

Man oh man. It's always something when a series writer just beats the heck out of their character. It may be a little hard for fans to see but it does show what the character is made out of. Sometimes you have to see a character fall completely and fight their way back up. Rick Remender's take on Cap has been rough. He's spent so many years in Dimension Z and we recently saw him suffer a great loss. Surely that's all the misery Remender would bestow upon Cap, right? Guess again.

With Arnim Zola's big plan about to be unleashed and infect the regular 616 universe, there's a lot riding on the heroes here. We've seen Cap gain a new ally but there's still some question as to whether or not he can fully trust this person. We also saw the cavalry arrive, sort of, as one of Cap's allies managed to come to Dimension Z and help him out. With so much at stake, there's huge potential for things to continue to go sour. We know Cap has to win in some way, especially since there was a brief mention of this storyline in a recent issue of Remender's UNCANNY AVENGERS. We just know it can't be an easy victory.

The course of this story has gone in some strange and interesting directions. It's been a fascinating trip seeing Cap in a different environment going through different situations. As we approached the ending, you could really appreciate what Remender has been setting up.

Was the ending satisfying? I'll admit, it was a bit of a punch to the gut. Right when you think you have it figured out, things take a turn. We'll definitely have to see what happens next. It's a little unfortunate that Cap won't get the chance to deal with the actions of one character. In a nice fashion, Remender does include an epilogue that keeps you on the edge of your seat. This is definitely something Cap will be feeling for quite some time.

I've mentioned it before so there's no need to go on about it. I can appreciate John Romita Jr's art in certain scenes. We know he can draw characters beat up very well. I just never cared for the way the creatures in Dimension Z looked.

Will we see any recover time for Cap? Will we see how he went from the end of this issue to the first issue of UNCANNY AVENGERS and other appearances?

I'm not crazy about one character killed but, hey, it's comic books so who's to say this is the end.

Rick Remender has done some crazy things to Captain America in these last ten issues, and that's a good thing. We've had the chance to see Cap in a different way and we got a pretty heavy ending that's bound to have a deep affect on the character. It's nice to see Marvel allow the chance for Remender to try something different rather than have him tell more of the same Cap stories we've seen. There should definitely be repercussions after this. After everything Cap went through, I feel like I need to recuperate as well. Remender shows us it is possible to tell a different sort of Captain America story. After this, it'll be interesting to see what Remender has planned next. 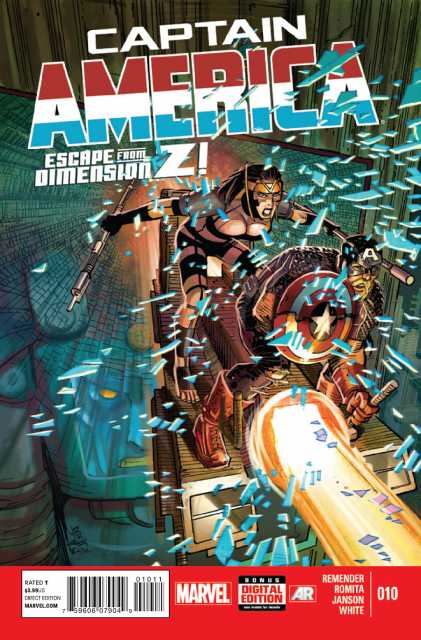