Espionage just isn't what it used to be.

BUTTERFLY opens with a wine bottle shattering, but that's probably the most jarring moment in the issue. Everything else is beautifully calculated, following a narration characterized by brevity and panels depicting deft movements and strategic decisions. It's this deliberate pacing that forces us to examine the emotional weight of the action, and it's just right for a spy book.

The illustrations are stylized, but suit the energy of the book. There are a lot of deliberate angles, movements, and shadows -- things seem to be shown or obscured with purpose. I like that I can't always pinpoint Butterfly's expression; she's cool and mysterious like that.

Our heroine is stoic, moving coolly along even as worst-case scenarios unfold and she ideates on fears and betrayals. She's a product of a modern spy era, focused on skills and execution above all else. Honed and hardened, Butterfly is on her game at all times.

Her father is another case, and as we meet him and shift the POV, the stark, single-word captions are replaced with a more meandering story. The language in the captions is more emotional, more descriptive -- though against any other narration, it might be considered plain. It's easy to see how Nightingale's daughter found herself on a similar path.

But even as their narratives spin differently, painting portraits of old and new generations of espionage, the reconnection of Butterfly and Nightingale feels intentional. Guns pointed, lifetimes of explaining to do, father and daughter are reunited and seem destined to align against whatever force brought them to this point.

I'm digging Adam Guzowski's rendering, but it looks like I've just been having bad luck with Boom/Archaia palettes lately. To my color-deficient eyes, this one seems like the entire book is in sepia (but I don't think it is).

BUTTERFLY unfolds delicately but deliberately, introducing us to a trustless world of espionage and the people affected most deeply by it. It's a family story as much as a spy story, and as two generations of deep-cover operative encounter each other in the least likely of circumstances, it's bound to get emotional. A sharp, well-executed first issue with a wealth of intrigue, this one's a must-pull. 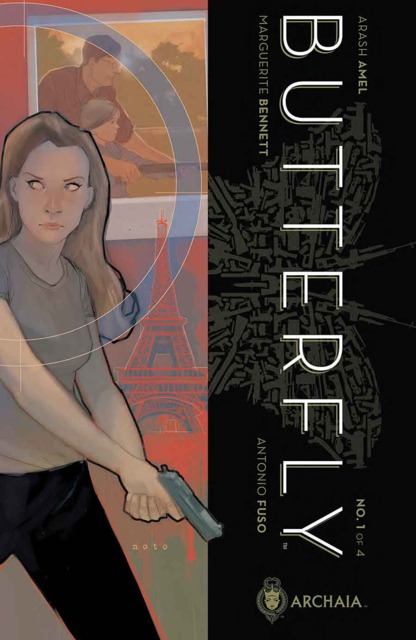