Bucky Barnes and Daisy Johnson visit a strange planet while someone familiar watches on.

More and more I'm warming up the idea behind this book. I've been a big fan of Bucky Barnes since he made his way back into modern comics. He's had a fascinating journey as the Winter Soldier and now in the hands of Ales Kot, things are getting even more fascinating. With Bucky as an intergalactic protector, the series is able to go in strange directions. We've already seen a future version of Bucky getting involved and now Bucky's mission takes him to a far off planet.

This series has a grand sense of adventure and this is amplified by Marco Rudy's art. I thought I'd only want to see Bucky running around in the familiar areas of the 616 Universe (by familiar, I mean on Earth). The visuals feel like they are out of this world and play to the sense of big fantasy-type action.

There's just something about seeing Bucky take on bigger threats and the addition of Daisy Johnson tops it off. It's good to have someone Bucky can work with. The fact that Daisy is more than capable of handling things on her own puts her at the level needed for the places they're headed. Let's hope they continue to keep things on a professional level.

We also get four pages of art by Michael Walsh. Walsh has been working with Kot on SECRET AVENGERS and it was a pleasant surprise to see his art here. Clearly Walsh and Rudy have different styles of art but the way the change is incorporated, by necessity, in the story is brilliant.

We still have moments where the story and art get a little trippy. You'll find yourself going back and re-analyzing pages and panels to keep up with the story. A couple moments I found myself just going with the flow in following the story.

Just when you thought you knew everything about the Winter Solider, you see there are all sorts of adventures he can go on. Ales Kot and Marco Rudy are taking the character to other territories, far off planet Earth. Kot's story and Rudy's art pushes your senses as you become immersed in the story. You may wonder what's going on at times but you'll find you can't look away. With so many layers to the story and comic, this is a series you'll want to see around for some time. There's so much potential and no telling what Kot may come up with next. This isn't a book you just read, it's one that you experience. 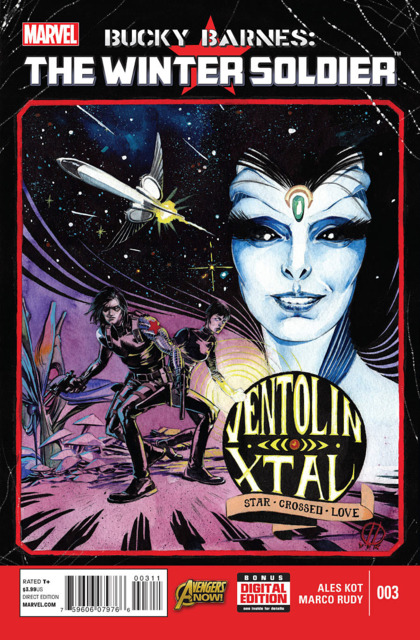