Bucky Barnes: The Winter Soldier #1 - Chapter One: The Transmigration of Bucky Barnes

Bucky Barnes has a new job in the Marvel Universe whether he likes it or not.

BUCKY BARNES: THE WINTER SOLDIER #1 is on sale Wednesday, October 1.

If you read ORIGINAL SIN, you're aware of the job Nick Fury took on to protect Earth. That job has not passed to Bucky Barnes. Bucky's had it tough lately. After his death, Buckywas a puppet of the Soviet government. In the present day, he finally overcame his programming and started the road to being a hero once again, even taking on the mantle of Captain America. Soon it became necessary for him to be presumed dead as he continued working covert missions. Now he has been thrust into a new role to protect the Earth, whether he likes it or not.

This new direction opens the door for a wide variety of stories. In this first issue alone, we see Bucky embark on missions in very different locations. This goes against the expectations we may have had when this series was first announced. There's no telling what type of missions he'll go on or where he'll have to travel to. Ales Kot is no stranger to setting up unexpected situations and you know you should be expecting the unexpected.

As seen in the preview, Daisy Johnson also appears in the issue offering some assistance. Whether or not she remains a part of the series, you'll have to wait and see. While Bucky may work great alone, because of the nature of the missions he'll have to go on, the idea of having a connection back to the core 616 world is a nice touch. There's a lot of potential for this series and it appears there won't be many limits.

Marco Rudy's art is something you need to prepare for. By "prepare," I mean it's like taking a trip. You don't really see many comics with art like this these days. The art immediately sets the mood and tone of the series. This is definitely not the Winter Soldier series you might have expected. Rudy's art and colors can be an almost psychedelic trip and moments of simple conversations make you feel like the characters are in a far off and secluded place.

The concept of the story is incredibly fascinating with plenty of opportunities for a wide variation in the type of stories we'll get. Where it might be a problem is for diehard Bucky fans. Bucky hasn't really had a moment of peace. This is exactly something Kot points out. It might be a little difficult to accept Bucky's new role but there's no denying how exciting it could be at the same time.

Ales Kot is a funny and brilliant guy. As seen in SECRET AVENGERS, he has no problem adding in humor in any situation. Bucky deserves to have some humor in his life but the couple times it appears here, it feels a little strange. Part of it is the situation and the other is the art. Marco Rudy's art conveys a certain tone. With the nature of the job Bucky has been tasked with, the humor might not fit in. Even though it's great to see Bucky isn't a cold robot of a character. There is a moment or two where you'll want to pay close attention to the art to be sure of exactly what is going on. In those moments, the dialogue needs to fit the situation.

We're seeing some big changes in Marvel characters these days. Marvel is showing they have no problem shaking things up in order to deliver some different types of stories. We've seen Bucky Barnes go through some changes since it was revealed he survived his initial death but this is a completely different direction. After the events of ORIGINAL SIN, Bucky is going to have his hands full taking on some pretty insane missions. Joining Ales Kot is Marco Rudy. Marco's art can get pretty trippy and it immediately establishes the tone of the series. Kot tries to lighten up the mood with a couple moments of light humor. This new role for Bucky creates excitement and some trepidation for fans. It's not always easy to see beloved characters go in new directions but Ales Kot is prepared to shake things up completely. This is a nice start to a brand new Bucky comic. Reading this series is going to be an experience you won't forget. 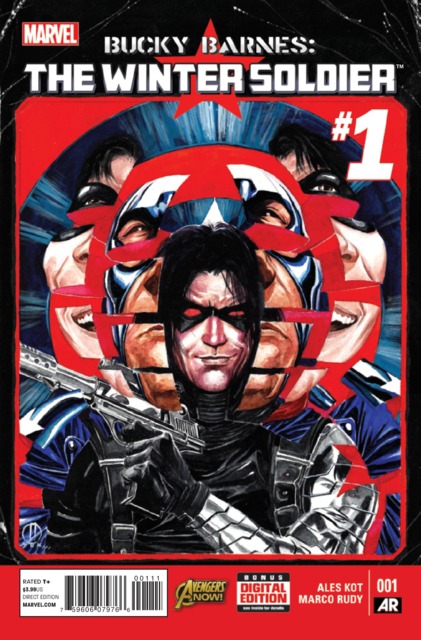