Fred Van Lente and R.B. Silva deliver a fascinating story about a telepath that doesn't feel like a story we've read many times before.

At it's core, BRAIN BOY is about a guy, Matt Price, raised by his parents' employers who uses his telepathic abilities to work for the government. It might sound like something we've seen before but Fred Van Lente grabs the idea and takes off with it.

What it really comes down to is Matt Price is a brilliant asset for the Secret Service. Who better to provide threat assessments for high ranking officials than a person that can read the minds of everyone in the area? Throughout this opening story, we find out about Price's character and personality that makes you care about him. We've too often seen characters like this with arrogance or some sort of superiority complex but that isn't the case here. Price knows he has a great ability and can handle new situations with ease but you never quite get that annoying feeling when reading about telepaths in comics.

By focusing on a government angle rather that straight up super-heroics, this series immediately has a fresh feel. Van Lente introduces us to Price's world and we get a good idea what makes him tick.

R.B. Silva's art is fresh and distinctive here. The moments when Price is looking into someone's mind has a different look than what we're used to with telepaths in comics. The colors by Ego gives the story a nice vibrant feel that helps bring it all to life as well.

Normally I always enjoy Ariel Olivetti's art. He does a great job on the cover but thankfully the main character looks a little tougher on the interior pages but doesn't have the typical comic book character physique.

We're finding out more about the main character and his past. Bits of it feel as if it could become a little cliché but it's still too early to tell. We're are indeed off to a great start but we'll have to see where the series and character goes from here.

With a title like BRAIN BOY, it's not immediately clear what the series will be about. Fred Van Lente takes the notion of a character having telepathy and goes in a different direction. Seeing a character use his powers for the government isn't necessarily something new but the execution in the story makes this series stand out from others. Van Lente does a remarkable job introducing us to a new comic "universe" without bogging it down with the usual first issue process. We find out what's going on and who is who while also getting a great dose of action and intrigue. Plus you won't see what's coming at the end. R.B. Silva and Ego do a great job with the art and colors, giving this a distinct feel that further sets it apart from other comics. BRAIN BOY is a great new series but then again, with Fred Van Lente doing the writing, it really shouldn't be that much of a surprise. I can't wait to see what happens next.

Note: After reading and reviewing the issue, I discovered that BRAIN BOY actually first appeared in 1962!! 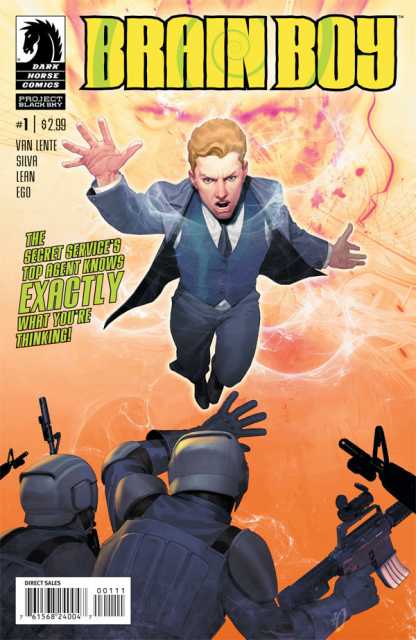