Bloodshot and his team create a plan to retrieve the nanites from Harada.

Co-writers Christos Gage and Joshua Dysart continue to impress me. No disrespect to the former talent behind this title, but prior to Gage/Dysart, it was basically a straight-forward action book with a bit of mystery sprinkled in. Don't get me wrong, I loved it a good deal, but these new co-writers have absolutely transformed this book into a totally immersive read -- it just feels so much more organic. Quite a few books would struggle with this many characters, but the two make the cast feel like living, breathing people instead of walking tropes. It's a really tight script and they just do such a commendable job keeping things interesting the entire ride. Be it fleshing out a character, making us laugh or hitting us with action, pretty much every scene manages to deliver.

The artwork (Emanuela Lupacchino, Guillermo Ortego, Brian Reber & Sotocolor) compliments the tone Gage and Dysart have created pretty well. While the previous run mostly thrived on graphic content (and my oh my did it look good), this one is all about the characters and their emotions. The expressions each character provides is crystal clear -- so clear that you could get the basic gist of what's going down without dialogue or captions. The book would be severely lacking without 'em, but you'd have no problem understanding where each character stands. Unless we're talking about Bloodshot, then he just always looks appropriately pissed. Oh, and the panel of Bloodshot and co. making their "entrance?" Superb.

While the co-writers are exceptional at handling characters and giving them standout personalities, it seems a bit early to already introduce yet another trio of characters. It would have been nice to see the previous three get some more room to grow before introducing new faces. I sincerely hope their inclusion doesn't mean everyone is now more expendable. Only time will tell and, on the bright side, their addition could make for some amusing interactions between the group members... assuming they all make it out of this mission, that is.

The fight scene with Harada's great, but the other ones felt pretty by the numbers. It's always a treat seeing powers on display, but it reached a point where you just knew each of them were going to get one-shotted by the ability which was provided in the panel. And I don't know about you, but I really want to see more of Mak.

BLOODSHOT & THE H.A.R.D. CORPS takes a twisted turn and has left us on one helluva note. It's a cliffhanger where I honestly have no idea what direction it'll take and I'm itching to find out. Dysart and Gage have taken such a violent character and turned his title into something legitimately fun without sacrificing who he is. If you want a book that's incredibly well-written, full of interesting characters and all kinds of crazy action, this is it. 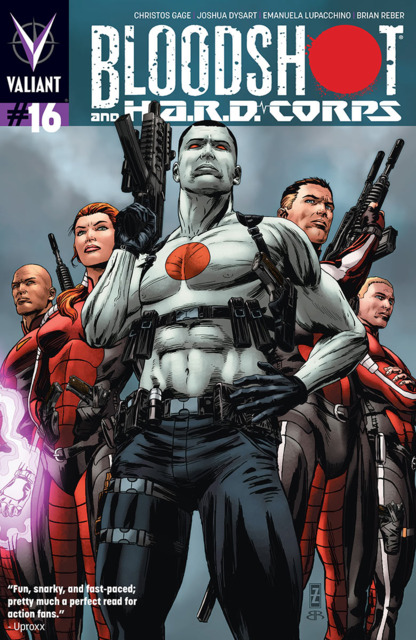