Bloodshot and the Harbingers escape from Project Rising Spirit, but it's not long before they bump into even more trouble.

This issue introduces Barry Kitson as the new illustrator (and one of the two inkers), and I've gotta admit, the dude's a very solid fit for the book. His style isn't as crisp or animated as what has come before -- it's more of a sketchy feel that's rough around the edges and has a grittier vibe to it. This perfectly compliments the tone of the book and the crazy violent scenes we're in store for. Just three pages in, Kitson proves he's the right man for the job as we're treated to the first example of Bloodshot doing what he does best: being thrown through the meat grinder. The panel of blood propelling out of his back is vicious as he's shot numerous times at point blank range. The panel after? Super badass. His work also makes use of a machete cringeworthy -- it's just a stab to the shoulder, but sometimes less is more. This just goes to further support Kitson being an awesome choice for the book, and Brian Reber's colors compliment it very well. The blood on the machete looks disgustingly awesome and you can't help but feel the pain from that hit.

Truthfully, not a whole lot happens in this issue (I'll elaborate in "The Bad"), but despite taking baby steps with the bigger picture, it still manages to entertain, and that's definitely a compliment to writer Duane Swierczynski. The experience may be a little overwhelming for new readers (lots of Harbingers, an ally's betrayal and Harada), but Duane manages to fill the pages with plenty of engaging dialogue and gives a bit of uniqueness to a few of the Harbingers -- even if you close the issue without recalling their names.

In the midst of all the chaos, there's a nice little moment where we dive into Bloodshot's emotions and how much this entire event has taken a toll on the guy. He can heal from virtually any physical wound, it's just too bad for him the worst injuries he has are emotional. This vulnerability definitely makes the character more appealing to me and you can't help but root for the poor guy.

The order of issue releases may feel a little odd to you if you're reading HARBINGER WARS, too. Sure, this issue picks up immediately after BLOODSHOT #9, but it concludes right before HARBINGER WARS #1, and issue that has been out for some time now. To top it off, HARBINGER WARS #2 comes out before BLOODSHOT #11, so whether or not we'll see BLOODSHOT retread what we will have already witnessed at that point has yet to be revealed. Backtracking is never fun, so hopefully if they do there will be a new perspective to make it feel fresh instead of repetitive.

There's a bit of exposition that stood out to me when Kuretich and Harada discussed Bloodshot. I know they have to name drop and fill in the gaps for new readers, but their dialogue felt a little unnatural to me. This issue also had something that's a personal gripe for me -- cutting to a character for a reaction before their vehicle explodes. Unless you're emotionally invested in the fellow (and we aren't), it just feels kind of pointless to me.

While this chapter does feel like filler, it's still sporting a thrilling action sequence, a gripping moment of vulnerability with Bloodshot, and engrossing dialogue to help give more life and a greater sense of empathy to the group of Harbingers. Sure, there's a bit of exposition thrown into the mix and it does feel a tad slow at times, but that doesn't stop this issue from leaving an impression. Kitson definitely impresses with the visuals, so I'm thrilled he'll continue with the title. BLOODSHOT continues to be the best big action book on the shelves... now it's just a matter of seeing how well they handle upcoming HARBINGER WARS moments we've already seen. 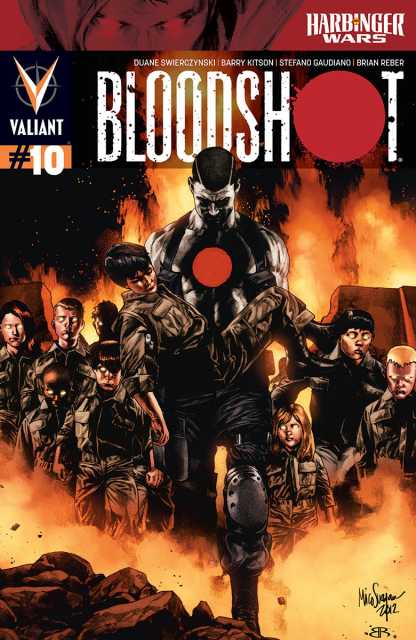