Natasha returns to San Francisco and kicks off a whole new string of mysteries in the process.

This is an absolutely perfect jumping-on issue. There’s little reference to what happened in the previous six issues and we open on a flashback that I’m not sure is canonical, but definitely fits within the narrative of the story on Black Widow doing some wetwork in San Francisco in that nebulous time known only as “Years Ago” and having a run-in with Daredevil, who was operating out of the City at the time. We pick up in the present with Widow arriving back in San Francisco. Now that Murdock’s back in town, his appearance again was only a matter of time, but he actually plays a very minor role, all told. We get to see Natasha’s daily preparation on a more mundane level than we usually get. The world’s most together Russian spy has her rituals but she’s usually portrayed as ultra-glamorous, so seeing her go through motions like brushing her teeth humanizes her to an almost shocking degree. This is, indeed, her life outside of the Avengers. Nathan Edmonson is doing so much in an incredibly short amount of time to develop what was already a strong character into the kind they make entire franchises out of.

Phil Noto’s art continues to be absolutely gorgeous, and the fact that he handles it from top to bottom is nothing short of incredible. He uses color expertly to instantly set a tone and mood in every single panel: the night time opening is grim, dark and dreary while the daytime is almost blindingly bright and overwhelming, mimicking the covert operative’s discomfort on being in the open. There’s so much more to the art than simply communicating what exactly is happening on the surface, there are layers upon layers and it makes rereads a treat.

Daredevil’s presence in this issue is extremely secondary, and while he may play into the storyline later, he just seems to be here for the sake of being here. This issue feels like both the beginning and end of a storyline because there are a TON of loose ends introduced, but the issue’s end has an odd sense of finality.

Whether it’s a standalone one-shot, or the beginning of something new, it’s worth checking out. Black Widow has never been better than this and the writing and visuals compliment and work off of each other so amazingly well, that I’m having a hard time envisioning her being done better than this in the future. There’re very few superheroics to be found here, and the few there are don’t contradict the tone, but don’t let that dissuade you: this is one of the most interesting, ongoing books being put out by ANY publisher. 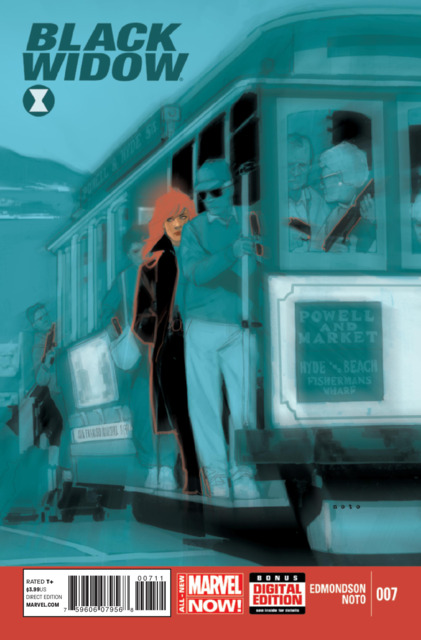