Natasha finally confronts the leader of CHAOS and does exactly what she needs to. In record time, in fact.

WELL! Nathan Edmonson! You certainly started this issue with quite the bang! After a great and welcome recap, Natasha picks this issue up and then runs with it at top speed as this is HER issue, and no one else’s. There isn’t even a SECRET WARS-branded logo at the end, the issue simply leaves off on what could be easily considered a cliffhanger and then...it’s over. After ending a very, very satisfying, unexpected storyline for Black Widow. As much as the Marvel movies have made a positive impact on the box office and been a positive force for the studio, it’s been painful to see some comics try to integrate the storylines and language of them into the books retroactively (if only there were some word for retroactive continuity!) and it’s been interesting to read Edmonson take on a very well-established character. Throughout the book Natasha’s done what she needs to, but never really enjoyed it, and has been a willing and able force for keeping the world at large safe. Now it’s time for some “her-time” as well as a new setting. Edmodnson writes Black Widow amazingly, particularly after the mission as she gives her real feelings on just what’s been going on and then he goes on to write the Avengers in a particularly cool, flattering way.

Phil Noto seemingly closes this storyline and series of story arcs with a bang, showing the clear and fluid motion that Nat uses on her opponents as well as keeping things seamless from one panel to another across the issue, even as heavier hitters like Carol Danvers, Cap and Hawkeye show up. Noto’s been carrying this the torch of this book since day 1, and it’s always looked great with only a panel here or there falling short and this issue is no exception. There’s surprisingly little action, but Noto succeeds at making the conversations and winding down of Nat’s adventures look interesting and uses his more recent, sharper color palette to highlight the emotional highs and lows of her decisions.

This book reaches its climax very, very early on in what could be described as a somewhat abrupt moment. Without giving anything away, there’s been an awful lot of buildup to this one character, and they out of the book in very, very short order (even with the OR ARE THEY ending) and while it gives more time for the characters to breathe and bounce off each other, it also made the last few issues seem much, much more inconsequential.

It’s unknown whether or not this series will continue beyond SECRET WARS, but if this is the last we see of this creative team on this character, it will have been a satisfying conclusion. Of course hope springs eternal that they’ll continue, and they do a good job of setting up possible threads that could be picked up later without making the end feel hollow. Natasha feels like she’s in a different place after this, and that’s a great thing for Edmonson and Noto to accomplish.

I really enjoyed the final issue as i have this whole series. Edmonson and Noto are fantastic together. I hope that they can come back after Secret Wars is over on either the next volume of Black Widow or Winter Soldier.

I've loved this series and I really hope is continues after Secret Wars. 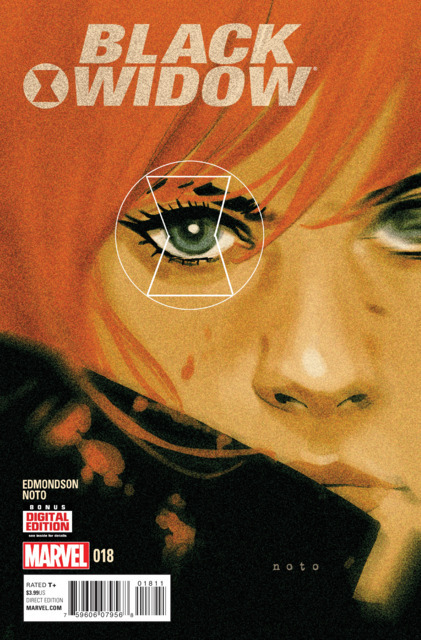