Black Widow continues her fight against Chaos but the fight might be about to take a turn.

This book continues to flesh out who Black Widow is as she moves forward in her mission against the evil organization known as Chaos. Last issue it appeared she was close to getting the answers she needed but things took a slight detour when she was overwhelmed by invisible fighters. It just may be that Natasha didn't know as much about Chaos as she thought. As she struggles to make sense of where she is now and what’s going one, Nathan Edmondson also sends us back to see some events from Natasha’s youth.

We’ve seen different bits of Natasha’s past and her connection to the Red Room. What we see here is a mix of innocence with a disturbing nature as to what’s about to happen. It’s almost a rare treat to see Natasha in this stage and you really feel for the character for what she’s about to lose. I never really thought about it more but I'd love to see more of Natasha's formative years in the Red Room.

As if the story wasn’t compelling enough, we get the amazing art of Phil Noto to move the story while giving us incredible visuals. You can almost get lost while reading this book because you’ll find yourself getting sucked into what’s happening on the pages. As you go through the issue, you’ll find yourself start going slower because you won’t want the issue to end. Noto’s depiction of Natasha in the flashback gave the story a separate feel while also capturing Natasha’s essence, even if it was before she became the character we know today.

It might not be a bad thing but seeing the flashbacks almost pulled me out of the present day portion of the story. I found myself wanting to see more and not thinking about her present day predicament. I wasn't really clear about the connection between the two portions. Maybe I just missed something or it'll be explained in the next issue.

Nathan Edmondson and Phil Noto continue to impress. Black Widow's tale against Chaos takes a strange turn. Before that can be fully explored, we get a flashback into Natasha's youth. We're familiar with her past but it was a nice treat seeing her before she was completely affected by her time in the Red Room. With Secret Wars coming up, the future of this series is uncertain. Let's hope there's plenty more Black Widow adventures by Edmondson and Noto to come. I can't get enough of this book. 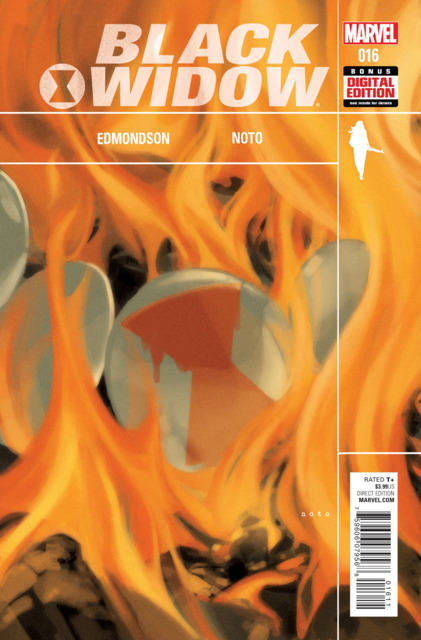