Black Widow has been targeted by a evil organization. Now she's turned the tables and is hunting down its members.

How long have you been reading Black Widow appearances? We often take for granted the fact that she doesn't have any sort of superpower. She's always managed to hold her own when fighting along side the Avengers and other superheroes. This series has been focusing more on who the character is and what she's really capable of. Having recently been targeted by an evil organization going by the name of Chaos (of course), Black Widow's life has been turned on its side. With her attorney (and pretty much confidant) shot and some of her black ops activities publicly revealed, Black Widow has had to move off the radar. This has allowed her to formulate a plan to get back at Chaos. With some intel she managed to obtain (in her own special way), she's now taking the fight to those that started it. That's where the action and suspense comes in.

Nathan Edmondson has taken a mainstream Marvel character and is giving us a story that really feels self-contained. We know she's a deadly spy but the way Edmondson and Phil Noto are depicting her strategy and actions really hammer it home. She'll do what it takes to achieve her goals and despite the use of weapons and explosions, it never feels gratuitous.

The same can be said for Noto's depiction of Natasha. She wears a skin tight black suit but it looks more like a practical outfit rather than the opportunity to show some skin on a female character. Edmondson and Noto show that we can have a female-lead series without having to rely on cheap tactics to try to appease male readers. It reads as if you could have a male or female in the role but it is pretty fantastic to seek Natasha kicking so much butt.

The series has consistently kept me glued. There's nothing to complain about. A second trade containing issues 7-12 (plus PUNISHER #9) has been released today so you can catch up if you've been missing out on the fun.

Black Widow is not a character you want to mess around with. Nathan Edmondson and Phil Noto are showing us exactly what she is made of. With an evil organization targeting her, she's turning the table around and taking the fight to them. The results are glorious moments showcasing what she can do. Each of these fourteen issues have consistently delivered great story and art. It's not often a series can maintain this kind of momentum. BLACK WIDOW is a series everyone should be reading. 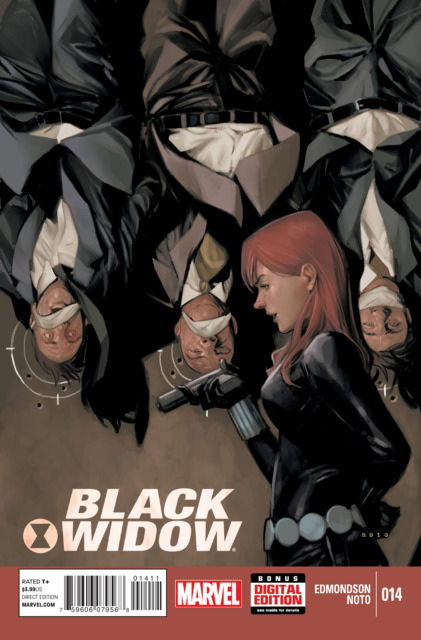