The walls of reality have been breached. That might sound cool but there's nothing but trouble coming.

Grant McKay fought for his life in the first issue. While it appeared he and the rest were on their way back to safety, everything turned upside down. What else would you expect when you try traveling to alternate dimensions?

The kicker here is while we're getting to know the other characters on Grant's team, it appears one of them sabotaged the technology that will help them get home. Tension is high and the risks are even higher.

Once again, we're treated to gorgeous art and colors courtesy of Matteo Scalera and Dean White. This reality may not be as lush as what we saw in the first issue but there's still a lot to see and enjoy.

Rick Remender fleshes out the backstory in this issue. The first had a lot of narrative but here, we get some flashbacks that let us know more on the what went into the project and why their boss, Kadir, is such an ass. As if things weren't bad enough, things get a lot worse for one of the characters.

The flashbacks are good but we pop back and forth to different moments. As we are now also in a new world, we're learning about it but we know the characters won't be there for too long. Kadir's serves a great purpose in being the resident jerky character you'll love to hate but, at least so far, his motives seem a little predictable. The information we learn is important but this issue felt as if it had more set up than the first.

BLACK SCIENCE is shaping up to be a crazy ride of adventures after adventure (provided the characters can survive their current location). We were introduced to the main character, Grant McKay in the first issue, but here, Rick Remender starts filling us in on who the others are. Aside from the adventure and thrills, there is a mystery to uncover as well with one of the characters possibly being a traitor. There's no telling what will happen next and who will live or die. That's just one thing that makes this a thrilling book. Matteo Scalera and Dean White are on fire in the art department. This is definitely one of those books where you're going to hate having to wait for the next issue. Time to start counting down the days until issue #3. 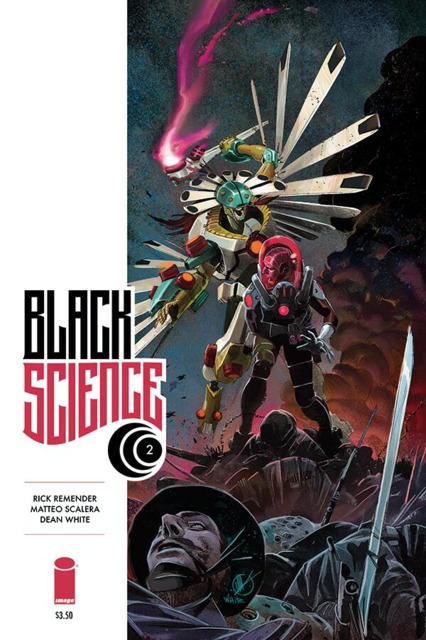