Here's your ticket to a brand new world with action and twists you won't see coming.

When BLACK SCIENCE was first announced, there was a lot of expectation out of this series. Rick Remender has quite the track record so it would be easy to expect or perhaps even demand his new creator-owned series should be awesome. We are comic book readers and having huge expectations isn't anything new.

The good news is, this book was pretty mind-blowing.

It has to be said the very first thing you'll notice is the color and art. Talk about "mind-blowing." Wait until you see the first page. Dean White's colors are amazing. Throughout the issue, you'll find yourself pausing just to take in the colors. Of course the art is a thing of beauty as well. Matteo Scalera is tasked to create a new world with new characters and species. We're thrown right into the action and you'll definitely want to know know more about this world from what we get to see.

What about the story?

Rick Remender introduces us to Grant McKay. It's not a full immediate introduction and that's part of the fun. Grant was a member of the Anarchistic Order of Scientists and is in a seriously deadly situation. As things progress, we get to find out more and more about it. I hate to make the comparison but I see him as a sort of Reed Richards-type character (without super-powers), with a more realistic touch. Grant's character has a more human feel to him as he is more than capable of making mistakes as well as doing amazing feats.

As we get a taste of what Grant is capable of and the places he may be going to, you can't help but want to know more. First issues usually have the task of introducing readers to the backstory of all the characters and the world they inhabit. Remender doesn't take things slowly. There is a frenetic pace to the story but at no times do you feel overwhelmed. Reading this first issue was like going to a fancy restaurant and eating an incredible appetizer. It's so good but you know there's something even bigger coming. I liked it so much, I read it again immediately afterwards.

There's nothing to complain about. This is a fresh new series that makes you happy to be reading something "new."

If you had high hopes for Rick Remender's new series, BLACK SCIENCE, you are in luck. We get a pretty amazing introduction to a new world of characters in a fast-paced, action-filled story. Forget those normal "first issues" where things slow to a crawl as we meet all the characters. Remender throws us straight into the action and throughout the story, you get a taste of what the main character, Grant McKay is about and capable of. Matteo Scalera's art and Dean White's colors are enough to make you wonder what you did to deserve such a treat. I'm not quite sure where the series is going to go after the first issue but I am perfectly content to be able to dive into a new series and just experience the story as it happens. Give this one a try. 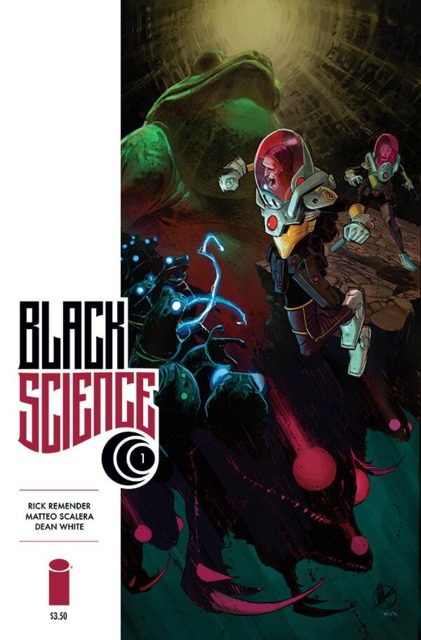