Black Knight is back but he may not be where you'd expect him to be.

I have a strange relationship with Black Knight. He was never one of my favorite characters. At the same time, I have felt a bit of connection to him since he was in the AVENGERS series when I first started reading comics. Hearing he was getting his own comic as part of the All-New, All-Different Marvel launch didn't excite me too much. Seeing the comic would be written by Frank Tieri with art by Luca Pizzari was intriguing. The fact that Black Knight would be in Weirdworld was...kind of weird.

As with the other new Marvel titles, we're basically thrown into the story. Dane Whitman is in Weirdworld and basically in command of a region. There is a big sense of "what is going on?" but the mystique adds to the suspense of the story. Despite my lackluster enthusiasm for Dane, I found myself actually enjoying him in this element. Perhaps this is what was always missing when I read stories with him in the past. I didn't want to see Black Knight flying around on an atomic steed. I wanted to see him in action along with the curse of the Ebony Blade explored.

Needless to say, Tieri has definitely captured my interest. This is an intriguing set up. Luca Pizzari's art works and captures the feel of what Weirdworld is like. Pizzari also gives Dane a slightly redesigned helmet for when he's in battle. At first I wasn't sure how I felt about it but taking time to think about it and seeing him in action with it, it really grew on me.

For those wondering how exactly Dane got in his current position, we do get a glimpse. There's a bit of a twist that will make you look at the series differently. If that wasn't enough, Tieri also throws in a second twist at the end, setting up a big conflict for the second issue.

Black Knight has always been an odd character for me. The notion of a knight in shining armor in the present day felt a little odd despite him being along side the likes of Thor, Hercules, or other characters from different eras. This isn't Black Knight in the present day New York City of the Marvel Universe. Placing him in Weirdworld opens up a strange new door and Tieri adds some new elements to Dane Whitman while also calling in major aspects of what makes him who he is. Pizzari's designs and depiction of Weirdworld really fits the vibe of the book. I wasn't really a fan of Black Knight before but it looks like Tieri and Pizzari are changing that. This definitely falls into the different part of "All-New, All-Different Marvel" and that's a great thing. 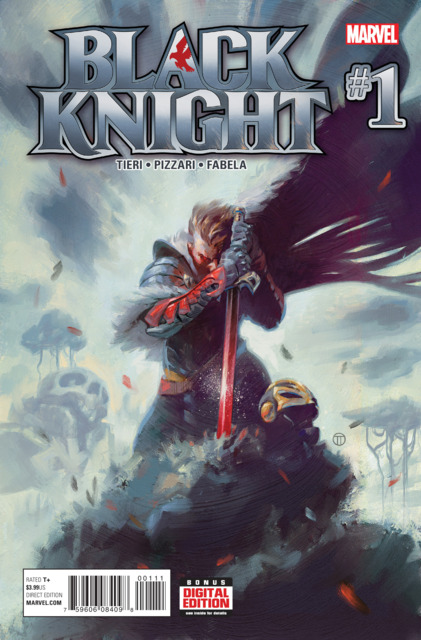