Black Canary #1 - The Most Dangerous Band in America

Black Canary takes the spotlight...literally. She's on tour in a new band but why is she fighting at every show?

BLACK CANARY is a showing of how DC is mixing up the types of books they put out. We've been seeing this shift with a wider variety in the tone and vibe of the different books. A good example is the recent revamp in Brenden Fletcher and Cameron Stewart's BATGIRL. Spinning out of that series we now have Black Canary in her own book, also written by Fletcher with Annie Wu on art.

If I'm being honest, I wasn't sure if this book would be geared towards me. I have no problem with different books trying to reach different readers. The more readers, the better, right? Black Canary as the singer of a band and going on tour reminded me a little of JEM AND HOLOGRAMS and a little of SPIDER-GWEN. But this is Black Canary we're talking about. And being able to talk to Fletcher and Wu back in February aroused my curiosity. Reading the issue opened my eyes further.

Despite the introduction of Dinah being a band in the pages of BATGIRL, many may argue this isn't who she is or what she's about. The reality of it is, it's not necessarily that she sought out to be a singer. It fell into her lap and she needs the money to rebuild her life after a little fiasco involving Barbara Gordon.

Fletcher gives us a good look at the life on the road and trying to make ends meet from venue to venue. There is something more than just that going on. Even though Dinah is going by the mysterious name of "D.D.," there shouldn't be any reason anyone would recognize her from her past. Still, with each show, trouble is following them in a big way. That's part of the mystery in this opening arc and it's not going in the direction you might assume it will.

With Wu's art, there is a great indie rock feel to it. Combined with the colors by Lee Loughridge, each panel almost feels like an indie rock show poster. I've seen some criticism against that but I think it's kind of brilliant in that way. When I think back to the visuals in BIRDS OF PREY and TEAM 7 with Dinah, the art was good but nothing really stands out in my memory. It was your typical really good "superhero" art. The art and colors here are setting out to do something different.

I'm still not quite sure how I feel about Dinah as a rock singer. It's not how I think of her from years and years of reading comics with her. But again, sometimes change can be good or interesting. This may be a turn off for some but it is a matter of giving it a chance. This is still Dinah at her core underneath the stage performances. She does kick a lot of butt. I'll stick around to see where this rock tour story goes for sure.

BLACK CANARY is not your typical DC Comics book. That's a good thing. We're starting to see more variety in the books being published. While Dinah's new profession as a rock singer may seem odd to longtime readers, it's creating a new situation that is worth checking out to see where it goes. Brenden Fletcher, Annie Wu, and Lee Loughridge are truly pouring in the indie rock feel into the comic. Aside from the stage performances there is plenty of action, suspense, and heart seeping between the pages. I'm curious to see what's going to happen next. 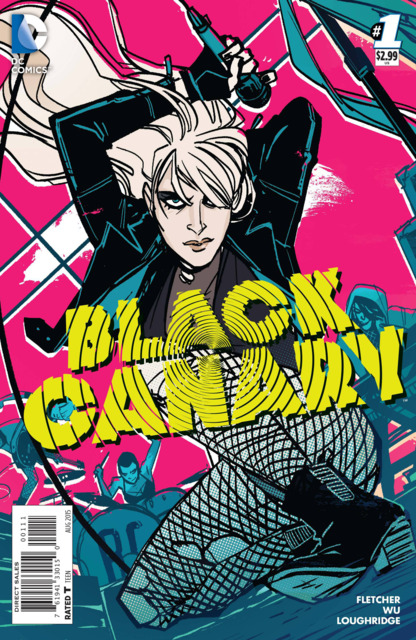