Bill & Ted show Chuck why being bad is totally bogus

Bill & Ted take a young Chuck De Nomolos throughout time to show him he doesn't have to be a stick in the mud. He seems changed... or is it all a ploy to destroy Bill & Ted's totally awesome legacy of awesomeness?

BILL & TED'S MOST TRIUMPHANT RETURN is simply delightful. It's just a very fun and strangely uplifting book. The whole issue really revolves around Bill & Ted trying to make Chuck understand the world isn't an awful place and even though history is set, you can still make changes to make your life a better place.

One of the highlights is getting to see Billy the Kid again, as he engages in a classic Wild West Saloon fight, with all the fixings. By the way, don't swear in front of a lady while Billy is around or he'll hit you with a whisky bottle. I like how he was incorporated into this issue to prove a point and not just thrown in to please fans.

The story continues forward and leads to a moment where Chuck learns how to play music from Bill & Ted and must battle a Bill & Ted robot he made to destroy the founders of the future. It's a quick, fun battle and leads to a big change in the direction of this book and the Bill & Ted universe. The hook at the end is going to really grab readers and it's the best ending yet for this volume.

The creative team is really fantastic on this series. Writer Brian Lynch's dialogue is humorous and moves the story forward. He's captured the essence of both of these characters extremely well and it really comes out on the page. The art team of Jerry Gaylord (pencils and inks), Penelope Gaylord (inks), and Whitney Cogar (colors) capture the fun and light-heartedness of the story and present some terrific art filled with life and vibrancy.

On the opening page, the panel placement is off. Panel 2 hangs lower than panel 3, and some of panel 3's dialogue is above panel 2, so your eye right away goes to the 3rd panel to read. There are some other minor page layout problems as this issue continues on with just panel placement and the flow of each page.

The art on the back-up story is a bit flat. It has this cool, animated style, but the inks for it were weak and made the art feel a little lifeless. It could have benefited from

BILL & TED'S MOST TRIUMPHANT RETURN is a solid and fun series for those who loved the movies. It plays extremely well to its fans and manages to capture the tone of the films, which translates exceptionally well to comic books. What makes this issue exceptionally excellent is the fact the hook at the end is leading to bigger and better things, something the first couple of issues didn't really do for readers. This book is on the up and up and if you're looking for a fun read, then check this issue out. 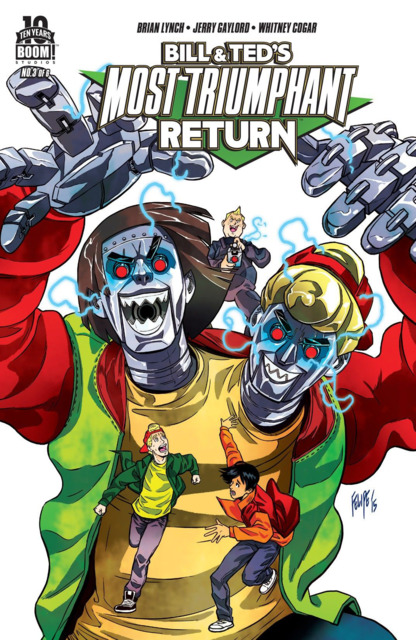