Bill & Ted have a hit on their hands, but now they need a second song

Bill & Ted return in this new series, which captures the tone of the original films exceptionally well. The book takes place moments after the end of Bill & Ted's Bogus Journey, right after both Bill & Ted wrote "God Gave Rock n' Roll to You" (which is actually by KISS). After their first song becomes a hit, the duo feels the pressure to write their next song, but they need to find some inspiration, so they head the the totally excellent future.

It feels like Bill & Ted never went away when you start reading this book. Writer Brian Lynch really captures the time and essence for this book. The reader will feel the connection to the cinematic world through the dialogue and ensemble of characters that carries over from the last film, including Death.

Probably the greatest moments of the issue is when Bill and Ted talk to Rufus about their future as musicians, and Rufus gives them a piece of advice. It may be the fact that I'm a huge George Carlin fan and his death truly bummed me out, but Rufus is always this voice of reason and wisdom and that carries on here. Lynch really captures his voice here.

The pencils of Jerry Gaylord, inks by Jerry & Penelope Gaylord, and colors of Whitney Cogar, deliver a fun, animated style that's well-suited for this book, which also reminds us that at one time, there was a Bill & Ted animated series. The art screams nostalgia in the best was possible. The page layouts are pretty straight forward and keep the reader moving throughout the issue as well.

In addition to the main story, there's also a back-up written by Ryan North that is well crafted and fits the space its in perfectly well. The story is quick, straight to the point, and there's no filler. Structure-wise, it's the epitome of what a back-up story should be.

Overall, the main story feels a bit hallow. It spends most of the time reestablishing the characters and the world of 1991, as well as the future. Both films didn't have mind-blowing plots, but the simple idea of "you're failing school, so here's a time machine to get people from the past," held a lot of weight for fans. Thus far, this issue presents the reader with the titular characters looking for inspiration and going to the future. The first issue's story just falls a tad flat.

The first issue of BILL & TED's MOST TRIUMPHANT RETURN isn't as sensational as the title makes it out to be, but it's still a fantastic venture into this new book. More than anything else, it's great to see these characters back in action, even if the first issue leaves the reader wanting a little bit more in the story department. The book is easily a hit with its target demographic, and it will put smiles on fans faces, just excited to see Bill & Ted travel through time again. 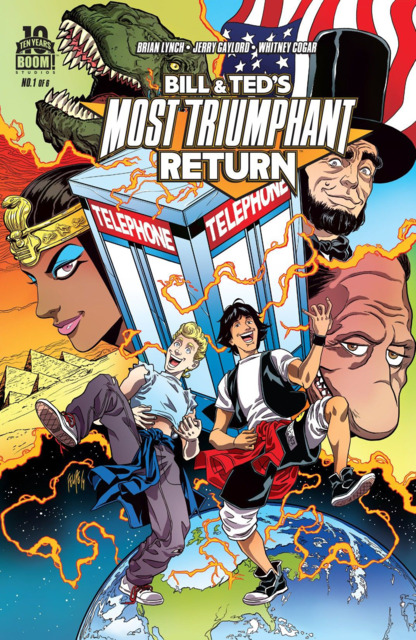