Jack Burton faces the Seven-Faced Widow and proceeds to make fun of her, in only a way Jack Burton can

This book is funny, and while it took me some time to get over the fact the tone is a bit different than the movie, BIG TROUBLE IN LITTLE CHINA #3 had me laughing out loud numerous times. Eric Powell does a great job at mixing in some comedy to this fantasy adventure series. The dialogue is very funny, but not just from Jack. Supporting characters here really make this issue a laugh riot.

The highlight of the overall issue is Jack and Egg meeting the Seven-Faced Widow, which is incredibly mean spirited but undoubtedly funny. Burton is incredibly witty and he has this innate ability to make people stumble over their words which is the real fun of each scene.

Jack Burton is written so well. He talks and talks and talks, no matter if anyone is listening or not. He's more like a cartoon doppelganger of his film counterpart, but it really works well on the page, and Powell really hits certain phrasing and beats within his speech that mirrors the film.

In each of the past issues, we've gotten a little bit more from Jack Burton's past, by way of stories about Burton's ex-wives. This is a really cool addition to the book and adds a lot. It gives Burton's past more of a supernatural element, and overall, they are totally fun, especially this issue, which shows Burton's 4th ex-wife, who was using mind control on Jack Burton to do her bidding. All the while, we get narration from Jack's perspective, which adds to the hilarity.

There's not a lot to pick on here. The book is fun and a great read, but this issue didn't really wow me in any way. Still, the series has been a ton of fun thus far.

BIG TROUBLE IN LITTLE CHINA is a hit. It's like if the movie got a Saturday Morning Cartoon that didn't get cancelled after a couple months. It's a series I, as a fan of the original film, really look forward to reading every month. Powell is doing one hell of a job of adding to the legacy of Jack Burton and this is one of the few times in my decades as a reader where the comic lives up to the license. If you're a fan of the movie, and you're not reading this, a pox on your house. 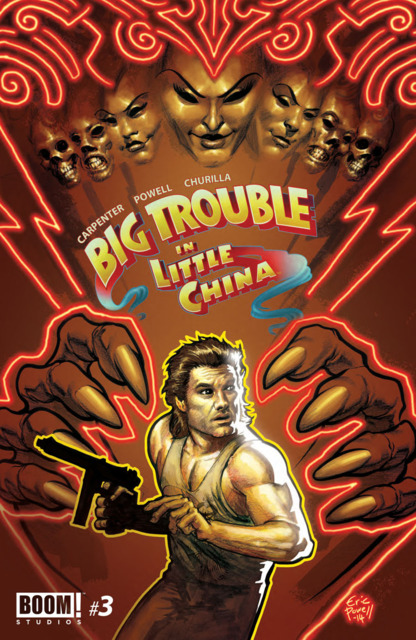