Big Trouble In Little China #1 - The Continuing Adventures of Jack Burton and the Pork-Chop Express Part 1: The Hell of the Midnight Road & the Ghosts of Storms

Old Jack Burton's adventures continue in this new series. First up, he has to crash a wedding.

When it was announced Boom! was going to do a BIG TROUBLE IN LITTLE CHINA comic, aside from the cheers, most fans thought "how is this going to work?" and not because it's impossible to use these characters and this world to create a new series. Fans didn't know what direction it would take or when it would take place.

What's really great about this opening issue is that it takes place right after the movie ends, as Jack Burton drives his truck, the Porkchop Express, down a lonely highway, talking into a CB radio to an audience of probably none. If you remember the film, then you remember the bigfoot-looking demon on the back. That's exactly where this story kicks off, which is completely awesome and a perfect way to continue the adventures of Jack Burton. He finds the demon, who strangely enough likes him, and heads back to Chinatown to see what's going on with this demon. Things escalate from there and a servant of Lo Pan wants revenge on Jack Burton and company, for killing his master.

Fans will be pleased with the direction. It has that same sense of adventure and mysticism, and that's probably because aside from the great Eric Powell writing this book, John Carpenter worked on the story. However, it's Powell that wrote the rest of the book, and he nailed it when it comes to capturing the voices of some of these classic characters.Jack Burton's non-stop talkfest into his CB radio and his inability to convey a message in less than 30 words shines through here. Egg Shen also stands out as being captured extremely well. The story is fun and builds on Big Trouble mythos and connection to Chinese mysticism, in America.

The art from Brian Churilla is a bit cartoony, and honestly, it took some time to get used to, but all-in-all, it's a great fit for this book. Between him and colorist Michael Garland, aesthetically, this book has the style that it should have, which is a bit more animated than one might think. There are times when backgrounds disappear or go flat, which can be aggravating, but in these situations, a character or action is being highlighted, so it's forgivable. Artistically, the highlight of this issue is the two pages where Jack Burton talks about meeting his second wife. The pages are bold and will keep readers staring at them for quite a while. Plus, it adds a lot to Jack Burton being in the wrong place at the wrong time.

There are a few scenes, in this issue, where the book misses the tone of the original film. Obviously, the comic and book are separate entities, but what the original film did incredibly well was balance comedy and action. The film was a tad more adventure and action than comedy than anything else. This book comes off a bit more zanier that the film, and while it's understandable the creative team wants to set their book slightly apart from the film, it may be a mildly uneasy transition for die hard fans.

It may be tough for people who haven't seen the movie to dive right into this book, since it takes place right after the movie ends.

There hasn't been another licensed book I've been more excited about, but Powell, Churilla, and Garland nail it here. It's a great follow-up to the film and Powell really nails the voices of these characters extremely well. While there are times where the tone gets a bit too silly, the overall story is pretty awesome and fits well compared to the film. It's a bit of a surprise that this book was enjoyable as it was considering licensed books tend to be not so great. The biggest problem this book will have to overcome is that it isn't as new reader friendly as it should be, but don't let that stop you from picking this up. 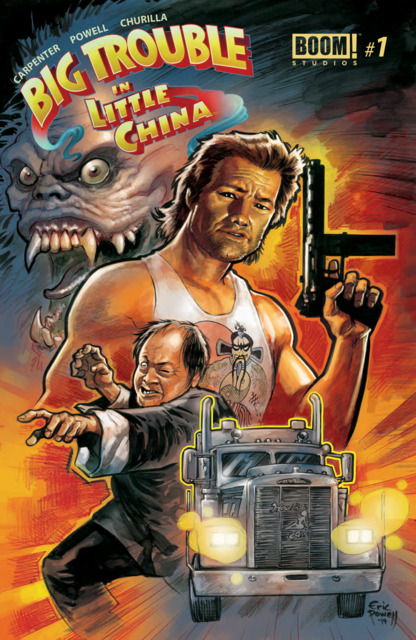